Badla marks the second collaboration between Amitabh Bachchan and Taapsee Pannu after Pink (2016). 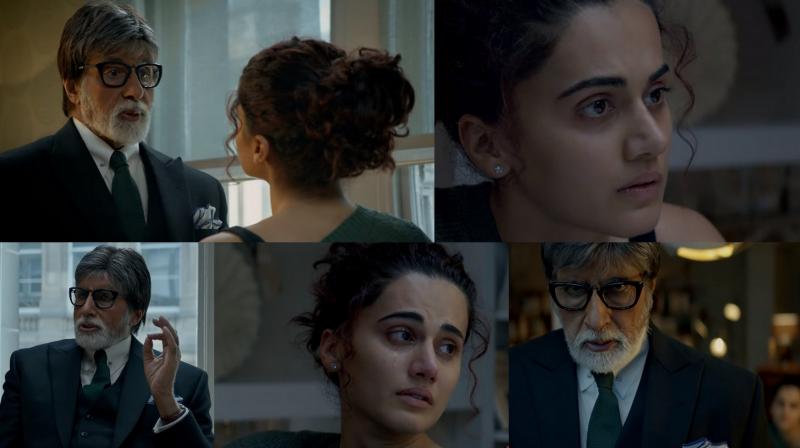 Mumbai: After releasing the exciting posters from Badla featuring the Amitabh Bachchan and Taapsee Pannu which created the storm over the internet now the makers have released the thrilling trailer of Badla.

The trailer of Badla looks so intriguing that it takes you on a thrilling ride with every passing scene creating all the more eagerness and excitement to witness the mystery being resolved. The trailer showcases Amitabh Bachchan playing the role of a high-profile lawyer, Taapsee, on the other hand, is seen playing a businesswoman who has been accused of the murder of her husband. Taapsee Pannu seen seeking help from Amitabh Bachchan who is handling her case.

Red Chillies Entertainment took to their social media and he shared the trailer, they captioned it, "Sach nazar ke saamne hai, par nazar jhooth par hai .
Watch the twisted truth trapped in a web of lies in the #BadlaTrailer".

Recently, the looks were unveiled through an interesting digital banter between Shah Rukh Khan and the leading star cast Amitabh Bachchan and Taapsee Pannu and the director of the film Sujoy Ghosh.

Badla marks the second collaboration between Amitabh Bachchan and Taapsee Pannu. Previously the actors have worked together in the 2016's Pink.