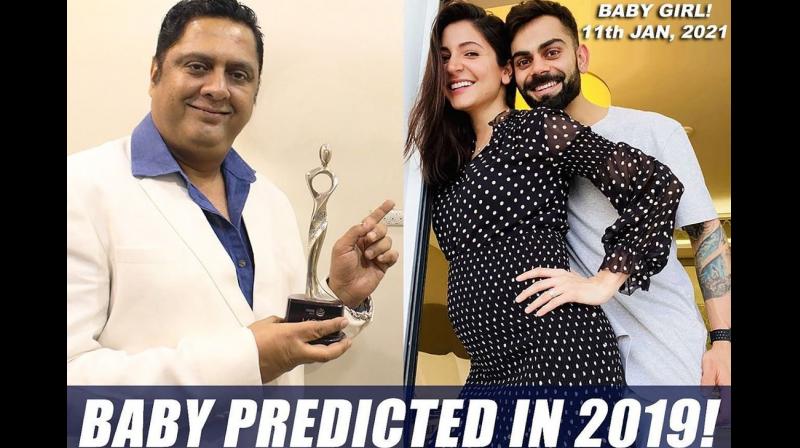 Astro numerologist Sanjay B. Jumaani had predicted before anyone else that Anushka and Virat would have a baby this year.

Fans might remember that during Team India’s last tour of Australia, Captain Tim Paine had sledged Rishab Pant during the MCG Test, asking him if he could babysit Paine’s kids when he took his wife out for movies. Sledging and rivalry apart, Rishabh did meet the Paine family, after which Paine’s wife Bonny called Rishabh the “best babysitter” on one of her Instagram Stories. Pant was later also spotted with Paine’s kids on New Year’s Day in Sydney.
Now, Australian Test opener David Warner is seemingly looking forward to returning that favour, although to Indian team skipper Virat Kohli. Coincidentally, the day India courageously drew the Test in Sydney was also the day Virat became father of a baby girl in Mumbai. And Warner has supposedly offered to share some babysitting tips with the skipper. “DM me for some tips,” Warner said as he congratulated Kohli.

A blessed child
Cricketing bromance apart, not many know that the famous Astro numerologist Sanjay B. Jumaani had predicted before anyone else that Anushka and Virat would have a baby this year. “Well, I did reason with Anushka’s mother saying that both would be in their favourable periods, and that they could be blessed with a baby around this time. Little did they think that our prediction would stump them in this fashion! Call it destiny’s innings if you may,” adds Jumaani with a chuckle.
Jumaani also tells us what it means for the baby girl to be born on 11 January. “Now, coming to what the numbers have in store for their bundle of joy… Blessed are they to have their little one delivered on the same date as the legend himself, the wall that stands still — Rahul Dravid!” he says. For fans of both Virat and Anushka, who have been wondering if the baby will turn into a cricketer like her daddy or steal hearts in showbiz like her mum, Jumaani gives us a peek into the little baby’s numerological significance too. “Born on 11 January, she is primarily a number 2, which is governed by Moon, the dreamy, romantic and artistic planet. We’ve been an untiring advocate of 2 (Moon) and 6 (Venus) being the best numbers for entertainment. It wouldn’t be a wonder seeing their baby follow her mom’s footsteps,” he says, adding, “Considering she’ll be brought up by her stellar parents, Lord Shanni could pretty much help her supersede her parents’ glory. Yes, the legacy shall continue.”