Controversy over Padmavati absurd: Shashi Tharoor says laws in favour of those 'offended'

The Member of Parliament said nobody should have the right to say what should go on in a movie or a book. 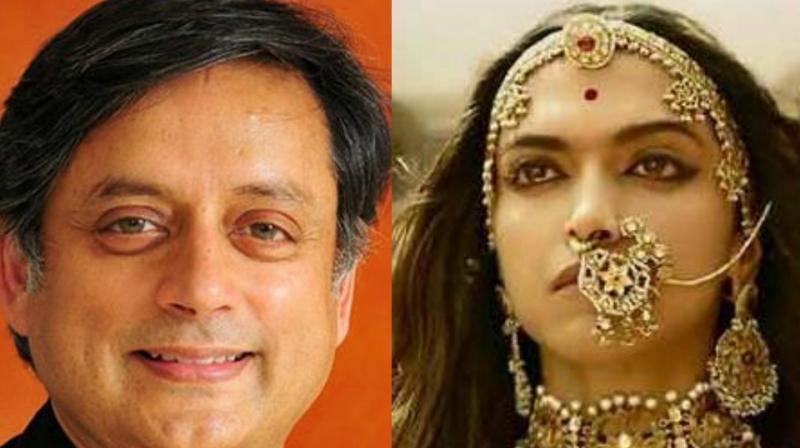 Shashi Tharoor, and Deepika Padukone in a still from 'Padmavati.'

Participating in an open forum on 'Freedom of Expression' during the International Film Festival of Kerala (IFFK) here, Tharoor said nobody should have the right to say what should go on in a movie or a book.

"The whole controversy against 'Padmavati' is totally absurd. We have reached a critical point where those who claim to be offended manage to get their way," the former Union minister said.

"All you need to say is something has hurt your religious sentiment, let it be a book, a movie, an article or even a headline and it doesn't matter even if it is accurate or truthful, but the law is in favour of them," a release quoting Tharoor said.

An adaptation of Malik Muhammad Jayasi's epic 'Padmavat', the film's release had to be postponed from December 1 amid protests by various Rajput groups and fringe elements who have threatened physical harm to its director Sanjay Leela Bhansali and lead actress Deepika Padukone.

Bhansali has been accused of depicting a romantic dream sequence between Padmavati and Sultan Alauddin Khilji (played by Ranveer Singh), a claim repeatedly denied by the director.

Historians are divided on whether Padmavati actually existed.

Tharoor, Lok Sabha MP from Thiruvananthapuram, claimed such issues escalate because the British wrote a law in the 1920s which says anything that offends the religious sentiment of a community is punishable.

"Sadly we haven't removed this from the law and it has become the favourite tools of those who have a problem with the freedom of artists," he said.

Participating in the discussion, noted filmmaker Aparna Sen said the idea of freedom was non-negotiable, especially for creative artists.

Noted that some people ask her why she was "protesting for a movie" when "thousands of farmers commit suicide" every day in the country, she said the protests were not for "merely for a movie".

"The protest was because the creative freedom and freedom of expression in the country is at stake," she said.

"We are living in a time of fear and everyone's freedom is challenged. This is how dictatorship begins," she alleged.

Sen said everybody has the freedom to protest, write and express, but that should not create a law and order situation.

"They can't say a movie shouldn't be screened or else it's actress's nose will be cut off," she added.

Malayalam actor Sajitha Madathil said the idea of freedom of expression has always been related to gender.

She mentioned about the social media attack against three Muslim girls recently for participating in a flash mob dance performance in Malappuram, wearing Hijabs, on World AIDS Day.

People who tried to support them were suppressed and silenced by fundamentalists, she claimed.

All these incidents were creating a fear psychosis among those who usually respond to such things. There has always been violations of freedom, she alleged.