While Netflix bagged ‘Dangal' for Rs. 20 crores, it has acquired rights for ‘Baahubali: The Conclusion’ for Rs 25.50 crores. 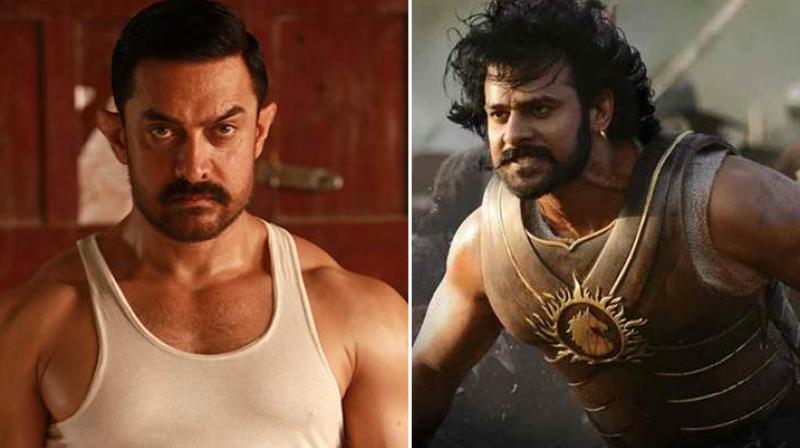 Stills from 'Dangal' and 'Baahubali: The Conclusion.'

Mumbai: 2017 was definitely not among the best of years for Bollywood, with several films including Shah Rukh Khan’s ‘Jab Harry Met Sejal’ and Salman Khan’s ‘Tubelight’ failing at the box office.

So much so, that the two films have been competing with each other to prove their supremacy on the box office front.

‘Baahubali: The Conclusion’ smashed ‘Dangal’s record of being highest-grossing film in India (earning close to Rs 400 crores) by grossing more than Rs 1000 crores including its Hindi version and all South languages.

The Aamir Khan starrer, however, did humongous business in China and beat the South drama by earning close to Rs 2000 crores, the highest collections by an Indian film at the global box-office.

However, the Telugu drama has pipped the sports film in the fast-growing medium for streaming rights.

While Netflix bagged ‘Dangal' for Rs. 20 crores, the popular international streaming platform has acquired rights for ‘Baahubali: The Conclusion’ for Rs 25.50 crores.

“Netflix is very bullish about the India market and is here for the long term. It is looking to acquire both licensed content and make originals but won't lap up everything."

"We are very happy and excited to partner with Netflix. Theatrically, it's not possible to reach all markets, but with this deal, Baahubali will reach 192 countries seamlessly," ‘Baahubali 2’ producer Shobu Yarlagadda told Live Mint.

‘Baahubali: The Conclusion’ will also reportedly release in China, giving it the opportunity to become the highest-grossing film at the global box office and hold all possible records for an Indian film.