Shashank Khaitan and Karan Johar got acquainted with Ishaan Khatter through his "quirky" Instagram videos. 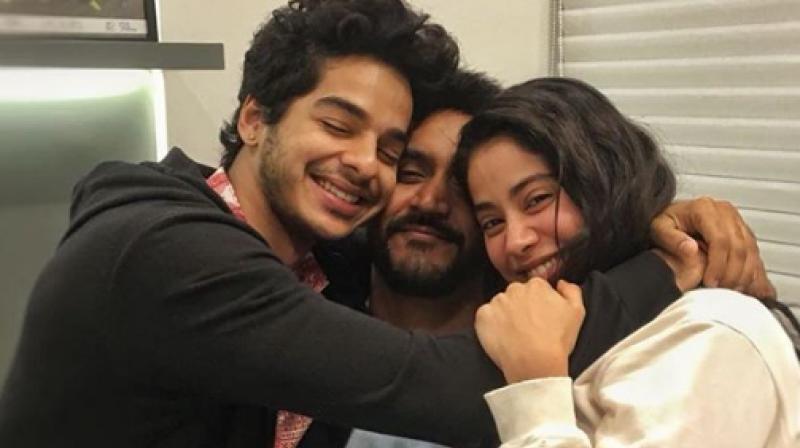 'Dhadak' is all set to release soon. (Photo: Instagram)

Mumbai: Director Shashank Khaitan says it was important to help Janhvi Kapoor get through the personal tragedy of losing her mother, veteran actor Sridevi, to fulfil his professional commitments towards 'Dhadak'.

Kapoor resumed shooting for her debut within 13 days of Sridevi's demise this February, the filmmaker said.

"It was very important not just for me but for my entire team to isolate what had happened as a personal tragedy and get back to filmmaking in a professional way. Everything I felt at that point was dealt on a personal level. Credit to Janhvi and her family on how they dealt with it. When we came back on sets, it was really important that we focus on the film and not let it bog us down or do things differently because then we would be cheating the film," Khaitan told PTI.

The director praises Kapoor for showing strength of character in tough times. He says once the 21-year-old actor was back on set, it was work as usual.

"We were behaving the way we were earlier and trying to make things normal. We had a proper 12-hour working day when she returned and we didn't make any special efforts to reduce the time or go slower," he says.

"As someone who knows her and her family, there were certain things I would do differently on a personal level which I would continue to do. But as a film director, I had a responsibility not only towards her but to everybody associated with 'Dhadak'," he adds.

It was designer Manish Malhotra, who suggested Kapoor's name to Karan Johar, who is producing the film.

According to Khaitan, Johar felt there was "something nice and interesting" about Kapoor, following which the director set up meetings with the then aspiring actor while he was working on his last release 'Badrinath Ki Dulhania'.

"Two months before 'Badrinath...' I started hanging out with her to understand her process and realised she knows cinema. By the third meeting, we were talking about how a character works in a film. I figured her process is similar to what I had learnt from Naseeruddin Shah sir. I gave her a few scenes of 'Badri...' and when she performed those, I knew she understood what she was doing," Khaitan says.

For the male lead, Ishaan Khatter, actor Shahid Kapoor's half-brother, the director says he and Johar got acquainted with him through his "quirky" Instagram videos.

"When we met him, we realised he was gifted. He turned out to be a natural fit for 'Dhadak' - age-wise and also for Madhukar's character. He impressed us right from the beginning," he says.

'Dhadak' is scheduled to release on July 20.