The actor, also the producer on the film, says that 'Jagga Jasoos' is a very original film and he's excited about it. 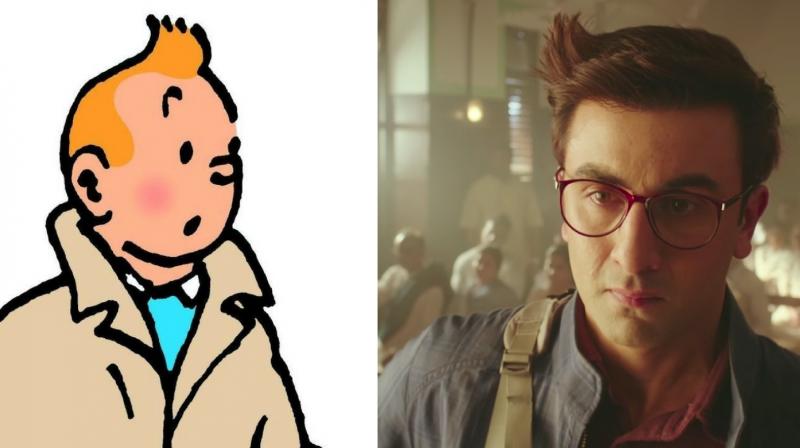 The hairstyles of Ranbir Kapoor in 'Jagga Jasoos' and Tintin is just one of the similarities people have pointed out.

New Delhi: Many have pointed out similarities between 'Jagga Jasoos' and Tintin, but the film's star Ranbir Kapoor refuted such claims, saying the upcoming movie is an original story.

The film's director Anurag Basu had previously come under scrutiny during 2012 film 'Barfi', also starring Ranbir, for taking references from the Charlie Chaplin movie 'The Adventurer' and 'The Notebook'.

When asked if he was confident about 'Jagga Jasoos' amid comparisons with Tintin, Ranbir said, "You cannot be confident till the film comes out. The film releases and the audience sees it. But, yes it was unfortunate that people thought that 'Barfi' had a lot of references.

"...I think dada (Basu), due to that experience, made sure that he made a film which will not remind you of any previous things. It's a very original film and I'm very excited about it," said Ranbir, who was in the capital to promote his action-adventure movie alongside co-star Katrina Kaif.

The actor said the film may have been in development for the last three-and-a-half year, but at the end of the day, what matters is how well it does on the big screen.

This is Ranbir and Katrina's third film together and Ranbir said they both have been lucky in terms of doing films with each other.

"People liked our work in 'Raajneeti' and 'Ajab Prem Ki Ghazab Kahani' as well. They liked our chemistry and we hope that they like us in this film as well. It's a new space for both of us. We're playing very different and new characters."

The former couple paid a surprise visit to students at Ryan International School, Vasant Kunj as part of the film's promotions.

The children could not hold back their excitement on seeing their favourite stars on stage and started hooting 'Ranbir... Ranbir' from the audience.

Katrina added, "I never went to a public school. It's nice to be here. I wish I went to a school like this. I didn't get a chance, but you all guys are lucky that you get to go to such a lovely school."

The actors chatted with the students and also performed with them on two popular tracks from the film - 'Galti Se Mistake' and 'Ullu Ka Pattha'. The film will release this Friday.