Entertainment   Bollywood  11 May 2017  Rohit Shetty is back as a host on the small screen
Entertainment, Bollywood

Rohit Shetty is back as a host on the small screen

Rohit, who is the host for the upcoming season, got up close and personal with us about his return to the small screen after two years. 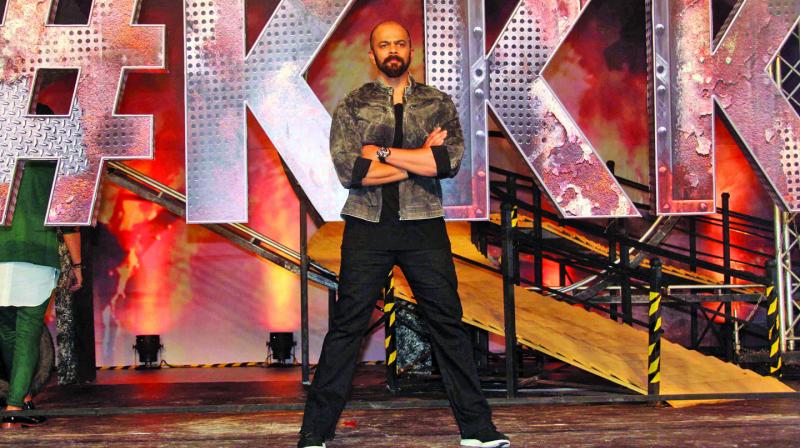 Even as director Rohit Shetty suffered a hand injury, nothing could faze his excitement at the launch of the eighth season of Khatron Ke Khiladi. Rohit, who is the host for the upcoming season, got up close and personal with us about his return to the small screen after two years and his upcoming film, Golmaal 4. Edited excerpts from the interview:

You are returning as a TV host after two  years. Were you approached for the previous seasons?
I couldn’t take up the previous seasons. Generally, we shoot the series between April and June, but last year the show went live in November. I was shooting for Dilwale at that time. We did try to collaborate but eventually I had to let go of the show.
When they came back to me, I watched every season and analysed what the TRPs were like. Then we worked on the show, changed the format. Now, I definitely have an emotional connection towards the show.

Geeta Phogat is the biggest attraction on the show. Are the remaining contestants wary that she will steal their thunder?
I am very proud that Geeta is doing this show. Obviously, she is going to give tough competition to others but the rest are as excited about it. Whether it is Karan Wahi, Rithvik Dhanjani or Nia Sharma, the television audiences love them. I keep telling the contestants that in a show like this, the most important thing is about technique.

You must be a relieved man now that the clash of Golmaal 4 was averted with Robot 2.0?
I am grateful and thankful to God that the clash is avoided since Robot 2.0 is a big film. If the movies were to clash, it would have harmed our business.

How has Golmaal 4 shaped up?
It has turned out very well. It has been a successful franchise and we are expecting it to do well at the box office.

Baahubali 2 had crossed the Rs 1,000 crore mark. Has it redefined the parameters of success by scripting a new history?
Kis baat ka pressure? We should celebrate the success of Baahubali 2. We are truly happy and will celebrate the success. It has made us learn that the aggressive promotions we do aren’t quite necessary — we are almost on every show and malls for promotions.

These guys went nowhere and look at the business the film has done. We spend too much energy and time on publicity. Baahubali is a great film. The whole country wanted to see it and the thing it taught us is, do we really need to publicise the film that much?