Kangana Ranaut who is known for making controversial statements about film fraternity has again taken a dig at Alia Bhatt. 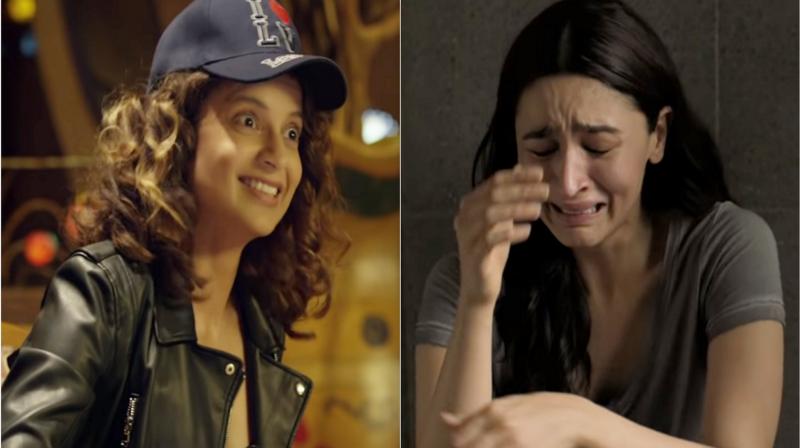 Mumbai: Kangana Ranaut who is known for making controversial statements about film fraternity has again taken a dig at Alia Bhatt. The 'Manikarnika' actor has recently felt embarrassed about being compared to 'Raazi' actor.

Apparently, Bollywood Life took a poll in which Kangana Ranaut won Best Actress for her portrayal of Rani Lakshmibai in Manikarnika. Notably, the actor beat Alia Bhatt who also gave a stellar performance as Safeena in Gully Boy. When the leading entertainment portal asked Kangana to know if she was surprised on beating Alia Bhatt's popular performance, she got furious and said, "I am embarrassed...What is there to beat in Gully Boy performance ....same snappy muh phat girl... Bollywood’s idea of a fiery girl, woman empowerment and good acting, spare me this embarrassment, please. Media has taken filmy kids love too far...stop pampering mediocre work or else bar will never be raised."

Well, this is indeed a strong statement against Alia. Earlier too, Kangana had slammed Alia for not commenting of burning national issues and took a dig at her relationship with Ranbir Kapoor. Hence, it would be interesting to see what Alia has to say about Kangana's comment.

On the work front, the Manikarnika actor will be next seen in Mental Hai Kya opposite Rajkummar Rao, which is scheduled to hit the screens on May 24. She is also currently shooting for Ashwini Iyer Tiwari's Panga. Meanwhile, Alia is currently busy promoting her upcoming Kalank, which is set to release on April 17, 2019. She will also be seen in Sadak 2. RRR and Takht.