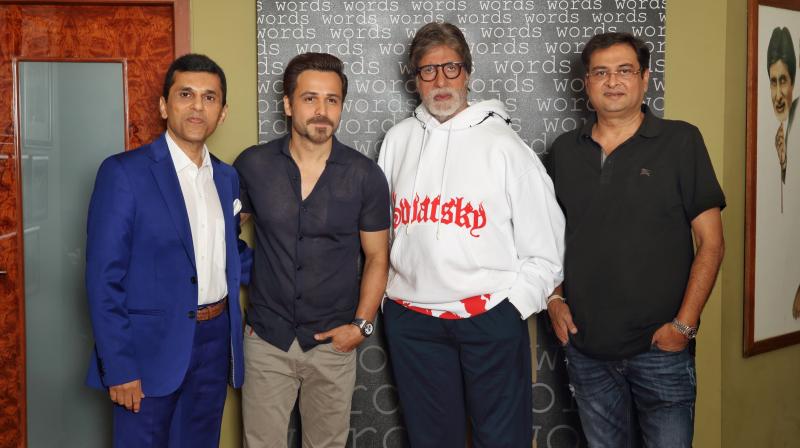 Mumbai: Movie Connoisseurs have an exciting 2020 to look forward to as Legend Extraordinaire Amitabh Bachchan and the dynamic Emraan Hashmi will be coming together onscreen for the very first time, for an intriguing mystery thriller produced by Anand Pandit and helmed by Rumi Jaffrey!

The taut thriller is all set to release on 21st February 2020 and marks the first time Amitabh Bachchan and Emraan Hashmi work with each other onscreen. The film is produced by Anand Pandit Motion Pictures & Saraswati Entertainment Private Limited. Anand  Pandit  Motion Pictures has been at the forefront of successful cinematic ventures such as Pyaar Ka Punchnama 2, Sarkar 3, Satyamev Jayate, Bazaar and the recent blockbuster Total Dhamaal.

Producer Anand Pandit speaks on his association with this exciting project and thespian Amitabh Bachchan, "My friendship with Bachchan goes back a long way. I have not met any other actor who matches his skill and commitment. It is an honour to be a part of creating a film with him, and I have always admired Emraan's body of work, so am looking forward to seeing him onscreen with the legend for the first time. Given the subject of the film, I do believe we have a winner in our hands."

Writer-Director Rumi Jaffrey adds on returning to direction with such a fascinating storyline and casting coup of getting Amitabh Bachchan and Emraan Hashmi together, "A film is a collaborative effort and when you have one of the best actors in front of the camera and a veteran producer behind the lens supporting you and leading all creative efforts, then making the film is a fantastic experience!"

While the other details around the film are heavily under wraps, initial reports have suggested it to be a thrilling entertainer, keeping audiences by the edge of their seats to watch Amitabh Bachchan and Emraan Hashmi facing off against each other in pivotal roles along with veteran actor Annu Kapoor.

The film will begin its first shooting schedule on 10th May with the dynamic duo.