Katrina and Ranbir finally on the same stage

They may not be together any more, but Katrina Kaif and Ranbir Kapoor ensured that the promotions for their film isn’t hampered. 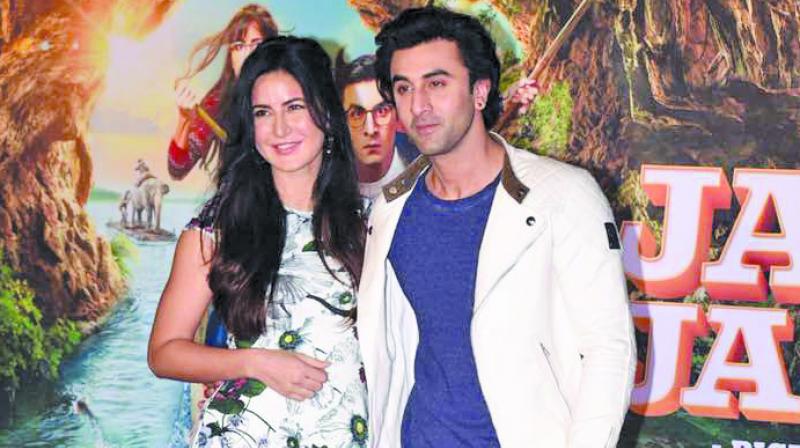 Katrina Kaif and Ranbir Kapoor were in a relationship when they started shooting for the movie Jagga Jasoos, but then they broke up. Speculations were rife whether the two would promote the film together or not. Squashing all rumours, both actors showed up for the promotions and seemed extremely comfortable with each other.

When Katrina was asked how was the experience to work with Ranbir again, even before she could reply, Ranbir interrupted “Katrina always used to tell me I have given you two superhits Ajab Prem Ki Ghazab Kahani and Rajneeti. Whatever you are today, it’s because of me. So, I promised to return the favour when I turned producer by making a superhit film. So, Dada and I made this film only for you, Kat,” he jokingly said. “She is amazing in the movie, and we are proud this is going to be Katrina’s best performance,” he added.

Further, when a reporter questioned Ranbir whether Katrina had not given any hits, pat came the reply, “Katrina Kaif is a superhit machine. I don’t think there has been a greater star than her in the film industry. Every generation, every decade sees a new superstar, and I think her achievements have been unbelievable. I hope she can double that in next ten years.”

A special song Galti Se Mistake was unveiled which showed Ranbir’s dancing skills. “Dancing is crucial in Hindi films. It’s difficult for me because I am not a great dancer like Katrina. Not many people know when Katrina did the Chikni Chameli and Kamli, I used to rehearse with her and show her the expressions, but there is no gratitude for that success,” he added playfully.

To which Katrina cheekily asked him “Peeke aaya, kya?” much to the delight of all around. The delightful banter between the two was infectious.

Directed by Anurag Basu, Jagga Jasoos has been in the making for almost three years.

Contradictory to the reports that Katrina won’t promote Jagga Jasoos, Ranbir said, “We all have worked hard for this film and have given our time and effort. This is my film as much as Katrina’s, and we would like to present it the best way possible. People should like the content.”

Earlier Jagga Jasoos was supposed to release with Saif Ali Khan’s Chef, Sridevi’s Mom and Shraddha Kapoor’s Haseena. But eventually all other films changed their release dates, and Jagga Jasoos got a solo release.

Reacting to this Ranbir said, “I am happy. Every film that clashes, loses out on business, but I also believe that a good film will always do well. It’s a good sign that other films have moved their release dates. I will send them thank-you notes,” he says light-heartedly.

He says, “Every film has its destiny. I have never played a part in when the film should release and Tiger Zinda Hai is one of the biggest film of Indian cinema. I am sure the producers would have worked on the logistics, but that is not for me to say as an actor. I was told our film was releasing in March and not December and I was okay with it.”