Entertainment   Bollywood  10 Apr 2018  Everyone present on the sets was really in awe of the scenes: Varun on October
Entertainment, Bollywood

Everyone present on the sets was really in awe of the scenes: Varun on October

Varun also spoke about his experience working with Shoojit Sircar, stardom, meaning of love and more. 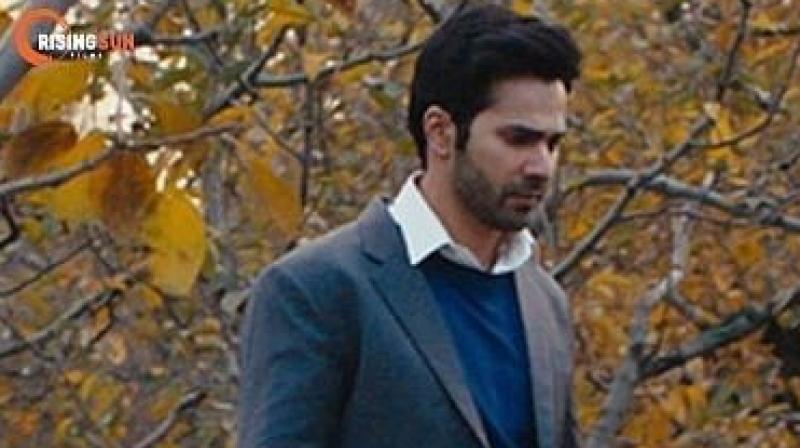 Varun Dhawan in a still from 'October'.

Mumbai: Varun Dhawan will be seen pitied opposite a new female actor Banita Sandhu debuting on the Bollywood horizon with his latest to release flick ‘October’. The film is being directed by Soojit Sircar . Varun also feels jealous of Ayushmann Khurrana for he was cast in ‘Vicky Donor’, speaking about it, the ‘Badlapur’ actor says, “Yes, Aayushmann was brilliant in the film. However, I had debut with SOTY and the film did well at the B.O. But I always desired to work with Soojit Sircar and finally I have done a film with him titled ‘October’. This chance did nit come easily though.”

Varun was surprised to note that director Soojit Sircar did not wish to promote his film ‘October’ so very rigorously. On the promotional strategy for ‘October’, he says, “Usually we promote a film for almost 15 to 25 days before the release of the film. However, Soojit sir wanted to promote the film merely for only five days. Which I found very strange. Undoubtedly, he then explained to me that if we promote rigorously I might give away the highlight of the film unknowingly.”

Speaking about his experience working with Shoojit Sircar, the ‘Judwaa 2’ star says, “Yes, really speaking I was very nervous before going on the shoot with him. Now he would always ask me not to act. I was shocked while handing over a water of glass he would ask me not to overdo it. My look at hi eyes needed to coincide while I was exchanging the glass. But it is then I understood what he was asking for. He always told me when people will watch this film they will then appreciate your powers’ of acting. While you know that you have been thoroughly natural. Shoojit wanted me to feel the lines and then deliver them without putting in any stress. Having worked with him I have calmed down a lot. Indisputably, I got to work with Shoojit only after I have done a few films. I always felt awe after watching his films One after the other all his films were not only successful but very different as well. Its indeed a privilege to be working with him I have learned so much.”

While talking about his image on screen, Varun tells, “My image is that of having done films filled with fun and frolic. People with whom I always interact know me as a happy go lucky type of an actor/person. I indeed do not wish to follow any one kind of an image. I always want to entertain the audiences. Though certain films of mine did well for masses while a few may have been liked by the elite crowd. But as an actor I certainly try to give a new side of mine to the audiences. I do choose character which needs to give a typical shock to my audiences presenting myself differently. Needless, to state I do not wish to get into any image at all.”

The success is quite unpredictable, but Varun proved himself a bankable star in the industry. Speaking about being successful he says, “Generally certain films are successful at Pan India level. Now look, my film, ‘Badrinath’ was successful film and it was liked by all kind of audiences. While ‘Badlapur’ when it appeared on television then one and all came to know about this film and thereafter they liked the film Initially, this film was even by mass audiences only. Everyone present on the sets right from the makeup man, driver spot boys and my driver who watched the shoot of October were really in awe of the scenes. So we are hoping the film is loved by all.”

Adding about his fan following from the kids end he says,” I am doing this film for the kids actually…every one of us may have tasted puppy love or whatever. This film represents a very typical style of love unlike today’s times. Usually, I have given my young fans films which made them laugh and enjoy. This film will teach them a lesson. This is a film which everyone will carry with them not only after they leave the theatre but they will have it in mind for a few days…contemplating over certain issues that they have witnessed through this film.
About the definition of love, Varun says, “Generally, we as human beings witness changes in our life time … generation after generation. However, we never believe that ‘love’ ki definition kabhi change ho sakti hai, But in today’s fast paced life the meaning of love also has changed for all of us. With social media being so powerful – we send a smiley or a smooch picture to our loved ones. We have no time to give to our loved ones. So in this jet age owing to our professional commitments we are unable to give ample time to our loved ones …then it may be your parents, friends or any of our special friends too.

While talking about the meaning of love, the Bollywood heartthrob said, “After performing in this film ‘October’ the meaning of love for me has changed. Usually, we take every relationship for granted ….I am personally never at home sometimes I fly to Dubai or travel to different places owing to my shooting schedules. We all lose attractions towards our near and dear ones. But having done this film the meaning of love is totally changed for me. It’s not money for me. Also tweets which gives us loads of likes  all this makes us feel good..Now, I always question myself …will we take money with us when we go for to heavenly abode??…No! All the praises etc that allures us will also never go along with us. Thus, I do not want to ponder over things like...Did I give enough love to my near and dear ones? With this backdrop story etched from Shoojit Sircar’s love life I am also a changed person. Infact we all are aware of all these facts. But we all tend to forget about the importance of the actual meaning of love. We need to have a simple approach towards life.