Entertainment   Bollywood  10 Jan 2018  Forget fallout, Akshay Kumar and Salman Khan are all set to have a grand re-union
Entertainment, Bollywood

Forget fallout, Akshay Kumar and Salman Khan are all set to have a grand re-union

Salman and Akshay have worked together in ‘Mujhse Shaadi Karogi’, ‘Jaan-e-Mann’ and ‘Tees Maar Khan’. 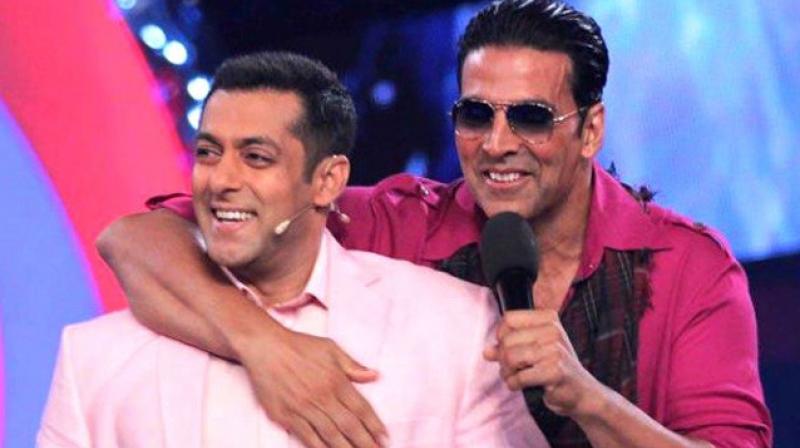 Salman Khan and Akshay Kumar on the sets of 'Bigg Boss'.

Mumbai: Salman Khan and Akshay Kumar have worked together in ‘Mujhse Shaadi Karogi’, ‘Jaan-e-Mann’ and ‘Tees Maar Khan’. The duo was even supposed to collaborate for ‘Kesari’ but due to certain reasons, Salman opted out of the project.

However, Akshay and Salman are coming together again, this time for the grand finale of ‘Bigg Boss 11’, reports Mumbai Mirror. Akshay will be promoting his upcoming release ‘Padman’ on the show. There is quite a possibility that Salman jokes about his exit from ‘Kesari’.

A source told the daily that Akshay and Salman will be performing on one of their hit numbers, most likely the title track of Mujhse Shaadi Karogi. Akshay will also be going into the house to spend time with the final three contestants and is supposed to give them some fun tasks to do. The episode will be shot in the early hours of January 14 with the winner being announced that evening. The show's team is also in talks to get the actor's his ‘Padman’ co-star Sonam Kapoor to join him and are waiting for a confirmation from her.

Sonam or not, the re-union between Salman and Akshay will surely be grand since it is the grand finale of ‘Bigg Boss 11’ with the superstars.