Entertainment   Bollywood  10 Jan 2018  After playing Rani’s mentor in Black, Big B to do an encore with Kangana in film
Entertainment, Bollywood

After playing Rani’s mentor in Black, Big B to do an encore with Kangana in film

Kangana will soon finish ‘Manikarnika’. Big B too has ‘Thugs Of Hindostan’ and ‘102 Not Out’. 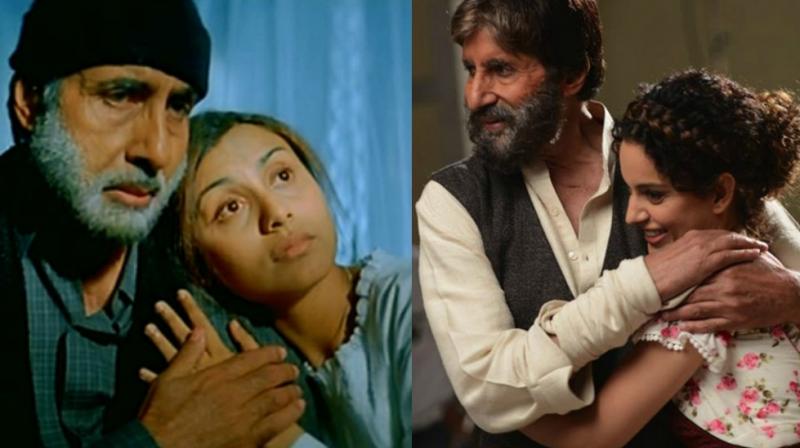 Amitabh Bachchan and Rani Mukerji in a still from 'Black', Big B and Kangana Ranaut in a photoshoot.

Mumbai: A Sanjay Leela Bhansali film ‘Black’ was considered the epitome of acting during its time. Along with Rani Mukerji’s wild nature as a visually challenged student, Amitabh Bachchan’s equal fierceness as her mentor made the film a worth watch. This time too Amitabh Bachchan has reportedly picked to play a mentor in R. Balki’s next.

Big B, according to a report on Mid-Day, will be mentoring an amputee in the film, which will be played by Kangana Ranaut.

A source close to the development tells Mid-Day, "Kangana had already been roped in for the Arunima Sinha (the first Indian amputee to scale Mount Everest) biopic. But the film showed no signs of kick-starting. So when Balki offered her this project, she was keen to come on board. The film revolves around a woman who is left handicapped after a freak accident, and eventually reclaims her life." The source further adds that Bachchan will be seen as her mentor, who will inspire her to rise against all odds.

The source adds, "Kangana will require a two-month-long prep to adapt to the body language of a differently-abled person. The actors are expected to sign the contracts next week and an official announcement will be made later this month."

Kangana will soon finish working on ‘Manikarnika: The Queen Of Jhansi’. Big B too has ‘Thugs Of Hindostan’ and ‘102 Not Out’ in his kitty.