Entertainment   Bollywood  09 Nov 2019  Efforts being made to paint me with saffron: Rajinikanth
Entertainment, Bollywood

Efforts being made to paint me with saffron: Rajinikanth 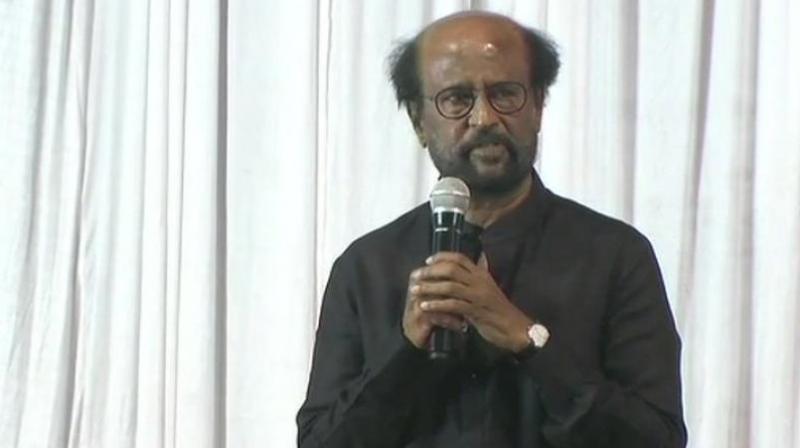 Chennai: Superstar Rajinikanth has stirred the political cauldron once again; this time alleging attempts to saffronise him just as some people tried to saffronise Tamil savant Thiruvallur. “But neither Thiruvalluvar nor I would get into any saffron trap,” the actor told reporters outside his Poes Garden bungalow in Chennai on Friday.

Rajini’s statement is being seen as a clear move to distance himself from the BJP even as his earlier statements and actions on various issues appeared to be pro-saffron; for instance, his statement sometime back that Modi is the strongest leader in the country because many have ganged up to fight him.

Answering questions on his political stand in the light of persistent speculation that he’s all set to start a political party and align it with the BJP during the next Assembly polls (2021) —  even if not joining the BJP — Rajinikanth now made it clear he would indeed launch into politics but “will not get into any saffron trap”.

He sought to play down the saffron subject, though; saying it’s only the media that was blowing it up instead of focusing on more important issues facing the country and the people. Thiruvalluvar was a saint hailed across the world for his wisdom and a believer in God. “He was a theist and not an atheist”, he said, hinting that the rationalist politicos too have been trying to hijack the great teacher-philosopher.

But then, it was understandable that some parties would stake a claim to the Valluvar legacy for selfish political gain. “There is nothing wrong with that. They (BJP) did something on their site (twitter) …..Thiruvalluvar will not get trapped in this saffronising, I will not get trapped either”, Rajinikanth said letting off his famous guttural laughter. It must be pointed out that all the statements from the superstar were merely in response to pointed questions from the media persons so as to elicit a super news copy, and not any voluntary revelations.

Thanking the Centre for the IFFI Lifetime Icon Award, Rajinikanth to a question made clear none from the BJP had approached him to join that party. “I have always made clear my position. Some people have been portraying me as a BJP man and that they (BJP) are waiting for me. This is not right. I alone must take the decision (about political entry)”, he said.

If his ‘won’t get caught in saffron net’ set off fresh speculation if things have gone wrong between him and the BJP, there was more excitement and heart-burning caused by the superstar in that media session. Answering a question as to whether he still saw a vacuum in the political leadership in Tamil Nadu (post Jayalalithaa and Karunanidhi), the star affirmed that was indeed the case. “There is a vacuum even now for a strong and able leadership”, he said, clearly indicating his intent to launch into politics.

DMK senior Durai Murugan reacted strongly to the ‘vacuum’ averment, saying Rajini’s words betrayed his political immaturity since he has failed to see that Stalin has successfully filled the vacuum.

Next followed the question about Rajini’s own plans to fill up that vacuum. Would he still get into serious politics since he has announced fresh movie projects? Rajinikanth saw there was nothing wrong continuing in cinema while opening up a political innings. He quoted a political analyst “rightly pointing out” that MGR had acted till the last minute before getting sworn in as Chief Minister.

Rajini said he would not contest the local body polls, expected in a couple of months. But then, his promised political party is yet to materialise though his studio buddy Kamal Haasan launched his Makkal Neethi Maiam (MNM) in February 2018 and even fielded candidates in the Lok Sabha polls earlier this year.