Secret Superstar is a bigger film than Dangal: Aamir Khan

The superstar reveals how the 2016 release was a man's story and how the upcoming Diwali release is driven by a female character. 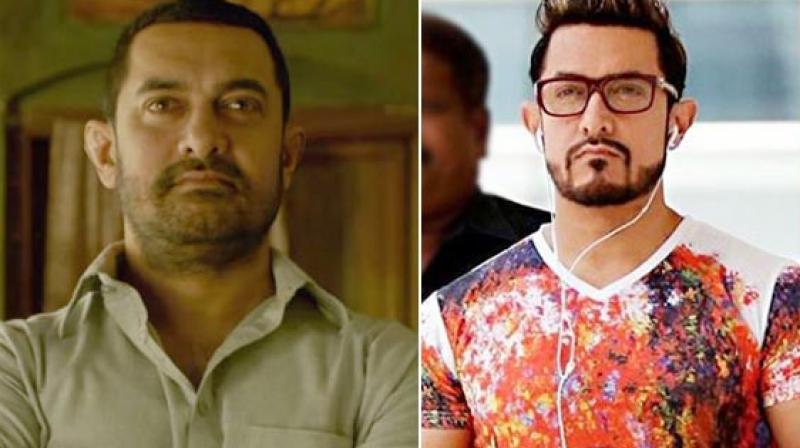 Aamir Khan in stills from 'Dangal' and 'Secret Superstar.'

Aamir said that while both of them are curious as personalities, he prefers to listen to what Shah Rukh says.

"I have sat with Shah Rukh many times. He is a very entertaining person to sit with. He is wonderful in telling stories. I love listening to him. I think between him and me, I am more curious because I like to hear him talk.

"I like the way he narrates his stories. He really brings the moment alive. He is a wonderful storyteller and there is great fun in listening to him," Aamir said in an interview here.

The 'Dangal' actor is currently busy promoting his upcoming production 'Secret Superstar', in which he plays a flamboyant music composer.

The 52-year-old actor said there are "real people who exist" like his character, but he is nowhere close to him.

"Why it is a tough role for me is because I have to feel like that character. When he is full of himself, I must feel 'I am the best.' It should come from within, which doesn't normally come to me. I am always questioning my work.

"My natural instinct is to be critical of myself whereas this guy is not at all. He is sure that he is the best, no question about it," he said.

Aamir also refuted the rumours that the character is inspired by music composer Anu Malik.

"You may see glimpses of people, but it's not modelled on any one person. It's not inspired by any one."

Written and directed by Advait Chandan, 'Secret Superstar' chronicles the story of a child, played by Zaira Wasim, who aspires to be a singer. The film reunites Aamir and Wasim post their blockbuster 'Dangal'.

While both the movies talk about women empowerment, "'Secret Superstar' is a bigger film than 'Dangal'", he says.

"The difference is, in 'Dangal' the lead character is still a man. It is Mahavir's dreams that we are seeing getting fulfilled. It is when he decides, not son but my daughter can also do it. It's his decision, not the daughter's.

"In 'Secret Superstar', it is driven by a female character, a 14-year-old girl in Vadodara. While 'Dangal' talks to the parents, trying to tell them not to differentiate between a girl and a boy child, this film talks to the teenagers," Aamir said.

'Secret Superstar' is scheduled to release on October 19.