‘Many warned against adoption’

When asked about her choice to be a single mother, the actress reveals that many people in her life warned her against it. 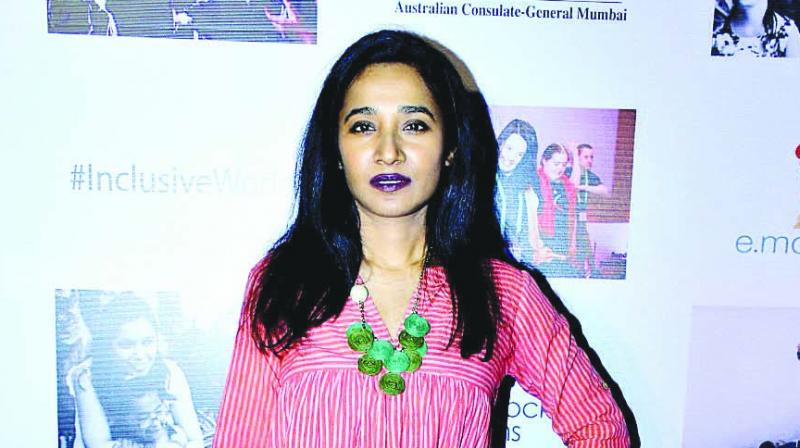 Switching gears to child’s rights, the 38-year-old actress says children should be allowed to play freely.

Tannishtha Chatterjee’s latest film Jhalki, a tribute Nobel laureate Kailash Satyarthi, was screened in his presence this Saturday. After the screening, the actors from the film — which is about a little girl named Jhalki who leaves home to rescue her younger brother Babu from a carpet-weaving unit — also participated in a round table conference, discussing the subject of the film: Child slavery and bonded labour.

Directed by Brahmanand S Singh and written by Prakash Jha and Kamlesh Kunti Singh, the film has done rounds of festivals like the Singapore South Asian International Film Festival, the Jagran Film Festival, as well as the Cannes Film Festival.

Talking about it, Tannishtha, in an exclusive conversation, says: “I am a single mother who has adopted a girl child and named her Radhika. She’s only been with me for three months, and when I first got her she was quick to question ‘abhi tak kahaan they?’ (Where were you until now?). There is a line in the film where Jhalki asks Boman Irani’s character the same question when they go to save her brother. So the film has been weaved with real incidents, and will remain in my heart always for that reason.”

When asked about her choice to be a single mother, the actress reveals that many people in her life warned her against it. “So many of my friends and relatives too advised me not to choose my freedom by adopting any child, and especially a girl. However, I was contemplating adopting a girl child for a long time. And this time, when my friends tried to remind me about my flourishing career, I simply said that I will manage it even with my daughter. And now I am really happy to be juggling my professional life with looking after her. Of course, it can get difficult, but managing on both the fronts makes me feel very happy,” she smiles.

Tannishtha further reveals that adoption was on her mind way before Jhalki came into the picture. “When I did Lion in 2016, where Saroo gets separated from his family at the age of five and then ends up being adopted, I have been contemplating adopting a girl since then,” she shares.

Switching gears to child’s rights, the 38-year-old actress says children should be allowed to play freely. “Kids who hardly have playgrounds, especially in cities like Mumbai, need to be set free to play by making more gardens and playgrounds. Children’s freedom with proper ethical upbringing is important. Child labour should be eradicated, especially because it can damage their personality development at this tender age,” says the Angry Indian Goddesses actress. Adding further, Tannishtha continues, “No child should be forced to work; they need to play and excel in whatever they wish to do,” she opines.

Meanwhile, the actress is all set for her directorial debut with Roam Rome Mein, starring Nawazuddin Siddiqui. The film is slated to premiere at the Busan International Film Festival.