Aamir is all set to play a central role in Gulshan Kumar’s biopic which will be directed by Subhash Kapoor in ‘Mogul’. 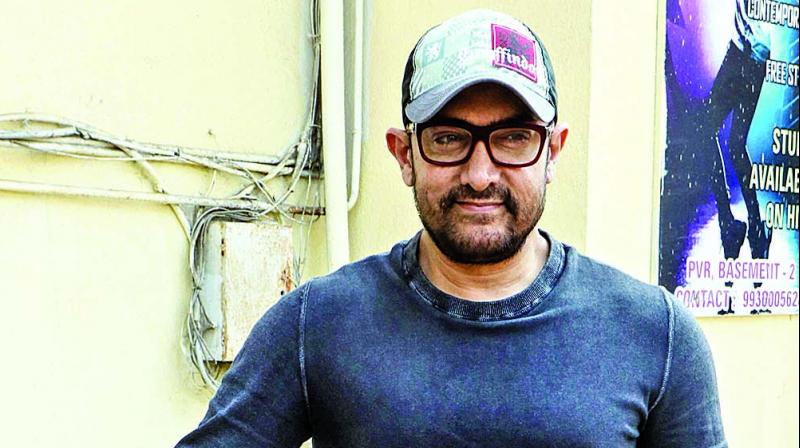 Mumbai: In a major development today, Aamir Khan has reversed his earlier decision to step aside from Gulshan kumar biopic.

Talking on the same to Hindustan Times, Aamir has definitely set a new precedent by working with the Director and shares that his intrepid step comes from the fact that a person is innocent until proven guilty and the courts will serve the ultimate justice. Last year in October, Aamir Khan had tweeted that he would not be a part of ‘Mogul’ and this bold step of reversal is the most recent development.

Revealing about why this sudden change to return to ‘Mogul’, Aamir Khan shares, “Well, Kiran and I were producing Mogul and I was acting in it. When we were doing the film we did not know that there was a case against Mr Subash Kapoor. I believe it is a five or six year old case. We are not too much in the media space, so I guess it slipped our attention. Last year, during the Me-Too movement, mention of this case came up. That’s when we got to know about it, and we were most disturbed. Kiran and I spoke about it at length. We were in a big dilemma for more than a week”.

He further expresses, “Mr Kapoor was denying the charge. This was not a case where there was a complaint about misconduct in the workplace. Had it been such a case, it would have gone to the ICC, and the ICC would have ruled on the case in a stipulated amount of time. However, this matter was in a court of law. ICC would have ruled within 3-6 months. Courts of law are known to take longer. Kiran and I have zero tolerance for any sexual misconduct. But without an ICC ruling, or a court ruling, how are we to decide whether the accused person is guilty or not. We are in no position to do that. Who are we to believe? The person making the accusation? Or the person who has been accused? And how long will the case go on? How long are we to wait to decide? In the end, we reached the conclusion that, in this disturbed state of mind, and with so much discomfort, we will not be able to do the film. It was more of a personal decision, a decision we took for ourselves to distance ourselves from the film. So, without casting aspersions on anyone involved in the case we stepped away from the film.”

With letting the due course of legality to prevail even after withdrawing previously from the film, Aamir throws more light and says, “Subsequently, Mr Kapoor was removed from the film. T-series terminated his contract. Then, we heard that Mr Kapoor was also dropped from some other projects which were in the development stage, which were in the pipeline. Subsequently, we heard that whatever steps he was taking to put together a film didn't go through, because nobody wanted to work with him.”

Taking of the effects on Subhash Kapoor’s life, the actor was quoted saying, “That really troubled us because we felt that our action had inadvertently cost a person - who is yet to be tried in a court of law - to lose his livelihood. And for how long? Is it for one year? Or ten years? We don’t know. What if he is innocent. We were very troubled. Laws of natural justice consider a person innocent until he or she is proven guilty. But until such time that the courts reach a conclusion, is it that he or she should not be allowed to work? Is he to just sit at home? Not to earn for himself?”.

“And so, we were in this troubled state for many months. I could not sleep at night because I used to constantly feel that my actions have inadvertently caused a person, about whose guilt I have absolutely idea, to lose his right to work and earn a livelihood”, Aamir expresses on how unfair it is to deny someone of professional opportunity without the verdict yet been served.

Aamir further was quoted saying on how he zeroed upon this bold step, “Earlier this year in the month of May, that’s about four months back, I got a letter from IFTDA. IFTDA is the director’s association. I think Mr Kapoor in his efforts to get work had written to his association, IFTDA.  So, they sent me a letter saying that his matter was subjudice, and that I should wait for the courts to decide on his matter. And until such time he should not lose his right to earn a living. In all fairness he has not been proven guilty. So, please don’t do something which will destroy him. He's a member of our association. You are a member of our association. And it is very unfortunate that he's not getting work. What is he going to do? They appealed to me to reconsider my decision. When I read that letter I felt even more guilty. Perhaps, we are doing the wrong thing.”

“And, then we decided to do one more thing to allay our discomfort. We decided to meet a lot of women who had worked with Mr. Kapoor. This was to just get an idea and verify it for ourselves, that are other women also uncomfortable with him? Has any other woman had any experience that was uncomfortable? If so, then that would make us certain that we don’t want to go into it. So we started that exercise. We met or spoke with around 10-12 women who had worked with him. Heads of Department, assistant directors, costume assistants etc”, as told by the actor who will work in ‘Mogul’ with the director.

With the right call to go further deep into the case and then come to the decision, Aamir also shares how the findings were, “What we found is that, without exception, all of them spoke very highly of him. Not only did they not feel any discomfort with him, but rather they went out of their way to praise him. They said that he looked after everyone on his set with great care. Caring, sensitive and supportive were the words used to describe him. Mind you, both Kiran and I are fully aware that these particular women may have had a very good experience working with Mr Kapoor, but that does not mean that he could not have misbehaved with some other woman. However, I cannot deny that this interaction with women who had worked with him, did give us comfort. And so, taking everything into account, I wrote back to IFTDA saying I have reconsidered my decision, and that I would come back on to the film.”

Talking about all the details on how the reversal was decided on, Aamir Khan has definitely taken the courageous decision despite being a personality in the public eye to bring in a new wave. With this, Aamir is all set to play a central role in Gulshan Kumar’s biopic which will be directed by Subhash Kapoor in ‘Mogul’.