Entertainment   Bollywood  09 Jun 2017  Ranbir Kapoor: Mistakes are just learnings and 'love' for me is not a mistake
Entertainment, Bollywood

Ranbir Kapoor: Mistakes are just learnings and 'love' for me is not a mistake

He also joked about Katrina being a super hit machine and she should just touch the film to be a successful one. 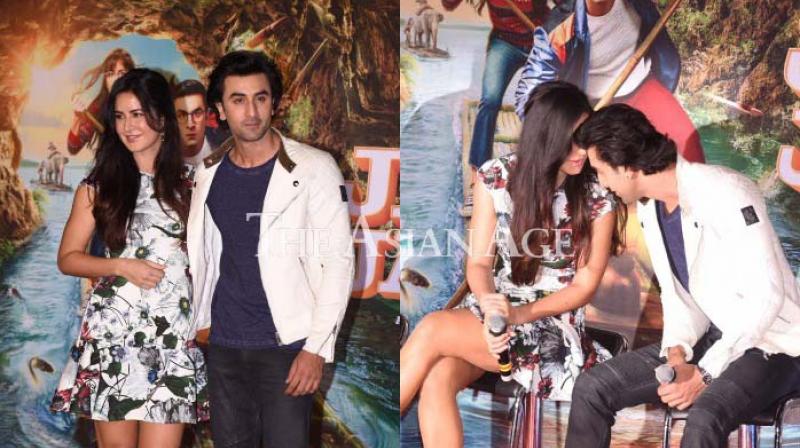 Mumbai: Ranbir Kapoor and Katrina Kaif starrer 'Jagga Jasoos' trailer and the first song 'Ullu Ka Pattha' has been receiving a thunderous response from the audiences, as the film exhibits crackling chemistry between ex-flames Ranbir and Katrina.

The head honcho of this film Anurag Basu released their second song 'Galti se Mistake' which features Ranbir Kapoor pulling off crazy antics in this quirky song on June 9. The song also has Anurag Basu in a cameo.

Quashing the reports of not promoting the film together, Ranbir and Katrina appeared together at the song launch. This was their first public appearance post their infamous separation. At the event, Ranbir said that the film was as much as Katrina’s, as it was his.

Ranbir began the event stating that nobody is to be blamed for the unexpected delay of the film. He said, “Three years ago when Anurag dada narrated the script to me, it touched my heart and we decided to jointly produce it. None of us knew that the film would consume so much time. I think it’s everyone’s mistake and we are to be blamed for the delay. Anurag dada was deeply immersed in this film and dedicated his three years solely to it, while we were busy shooting for our other projects. He’s the only one who has stood by this film.”

Talking about his crazy antics and dance moves in ‘Jagga Jasoos,’ the talented and versatile Ranbir said, “Dance is an essential element in Bollywood films. However, I think I’m not as skilled dancer as Katrina, she’s an amazing dancer. (Katrina interrupts, “Undoubtedly, that I am.”) Not many people know that I am the reason behind her amazing dance moves in songs like ‘Sheila Ki Jawani,’ ‘Chikni Chameli,’ ‘Masaha Allah.’ I would make her rehearse and get the desired expressions and variations for the song. There is no gratefulness about this that you have shown (indicating towards Katrina)”

Since the song’s title is ‘Galti se Mistake,’ Katrina was asked whether is there any particular age to commit mistakes and how much does she relate to it? After a minute of silence, Kat passed on this question to Anurag and avoided answering it.

Continuing with the ‘mistake’ questions, Ranbir was asked if there was any mistake that he wanted to rectify, to which he sportingly said, “There are no mistakes committed in life, they are only learnings, and that’s how you grow as a human being.”

Taking a cue from the earlier question, when Ranbir-Kat were asked about a mistake they wouldn’t hesitate to repeat (hinting at their spoilt affair), the ‘Ae Dil Hai Mushkil’ actor said, “I’m sure everyone wants me to say its ‘love,’ but for me love isn’t a mistake. I think peeing on the road is too much fun.” However, Katrina once again dodged this question.

Ranbir resembled a lot to his veteran grandfather Raj Kapoor in this song, to which he proudly said, “He’s always in my heart. Today I am sitting here is because of him. I feel very proud and responsible for keeping up with the ‘Kapoor’ legacy. I’m hoping that he’ll be looking at me happily with proud. I don’t want to waste the goodwill he earned, I’m trying to maintain it in my own way.”

Ranbir is an actor who has raised the bar for himself in every aspect, seconding to it are industry stalwarts Aamir Khan and Paresh Rawal. In response to which, the actor humbly replied, “They both have been supportive to me in my entire career. In fact, when ‘Bombay Talkies’ tanked miserably at the Box Office, it was Aamir sir who was travelling, but directly came to meet me, we sat the entire night together and spoke about films, the industry and everything related to it. His love for me is very deep. I really appreciate that. I hope I can live up to his expectations.”

The lead duo from the film shared their experience of working together on their third project. Ranbir pulled Katrina’s leg saying that she always taunted him saying that she has given him his two hit films- ‘Ajab Prem ki Ghazab Kahani’ and ‘Rajneeti’ and that he owes his achievements to her.

“It was then that I decided that whenever I turn a producer, I’ll be grateful to her and give back all that she has given to me by casting her in my film. I told her I’d make a super hit film for you. Anurag dada and I have made this film only for you. This is going to be Katrina Kaif’s best performance. I don’t think there has been a greater star than Katrina in this film industry,” said the 35-year-old actor.

When Katrina tried to intervene, Ranbir cheekily told her, “I’ve praised you a lot now. Don’t poke your nose in between.”

He also joked about Katrina being a super hit machine and she should just touch the film to be a successful one.

While Katrina went on to say that she is 'the' ‘jasoos’, Anurag made a shocking revelation that Ranbir Kapoor is the biggest ‘jasoos’ of the film industry.

Considering the amazing line-up of films in Ranbir’s list, he exclaims, “I feel extremely blessed. The last couple of years weren’t really good for me at the Box Office. Despite which, having a film with Rajkumar Hirani, Anurag Basu, Ayan Mukherjee, I feel safe. They are gifting their vision to me, and I really hope I can repay them with my talent. I’m grateful and excited for the line-up of films!”

“Initially, they all laughed at the film’s title, but cut to today, they have settled down with my suggested title,” revealed the chocolate boy of B’town.

There were earlier reports of Ranbir doing a cameo in SRK’s film, to which the former denied.

Giving their views about people getting trolled on social media, Katrina said, “Just enjoy the positive things and avoid the negative parts in it.”

However, when Ranbir was asked about his stand on the trolling done on social media, he quickly replied, “My stand is that I’m not on social media because I believe that it affects your mind and your purpose.”

At the event, Ranbir looked in a playful mood while Katrina trying hard to act peppy, giving us hints of discomfort between the two.

'Jagga Jasoos' ran into numerous controversies due to its innumerable delays and its famed A-list leads, who had an infamous separation. The film, which is a light-hearted spy saga is finally slated to release on July 7.