Entertainment   Bollywood  09 May 2017  Video: Vivek is out to nab goofy robber Riteish in hilarious trailer of Bank Chor
Entertainment, Bollywood

Video: Vivek is out to nab goofy robber Riteish in hilarious trailer of Bank Chor

While Ritesh mouths Marathi dialogues, Vivek impresses with his typical 'cop' dialogues in the trailer. 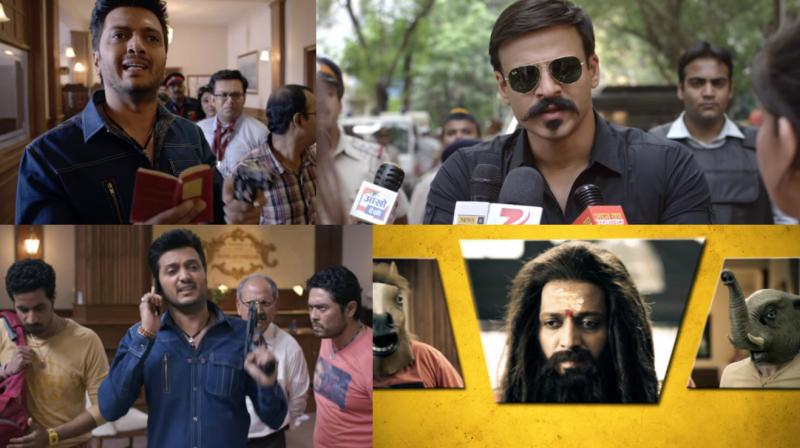 Mumbai: Riteish Deshmukh and Vivek Oberoi can give each other some credit for their fan following as their characters in the 'Masti' franchise are among their most loved ones.

In their first film together outside the franchise and without another of their partner-in-crime Aftab Shivdasani, 'Bank Chor', Riteish and Vivek are not a part of the same team this time but are going against each other.

In the trailer of the film released on Tuesday, we see Riteish and two of his accomplices, played by Vikram Thapa and Bhuvan Arora, not as stylish robbers like the 'Dhoom' baddies John Abraham, Hrithik Roshan and Aamir Khan but by  dressing up and acting like goofballs.

Ritesh is particularly impressive as he mouths lines in Marathi and takes the names of gods like Ganpati Bappa and Panduranga regularly and calls himself the ‘khushbudaar Bank Chor.’

Vivek Oberoi is the police officer named Amjad Khan, who is tasked with the job of nabbing the robbers and mouths typical lines like he not just breaks bones of the robbers but also their courage.

Rhea Chakroborty plays the news reporter and also has a dance number as can be seen in the trailer.

‘Bank Chor’ is directed by Bumpy and produced by Y-Films, the youth wing of Yash Raj Films.