The actress visits JNU and despite the backlash, the fraternity and her fans come forward to support her. 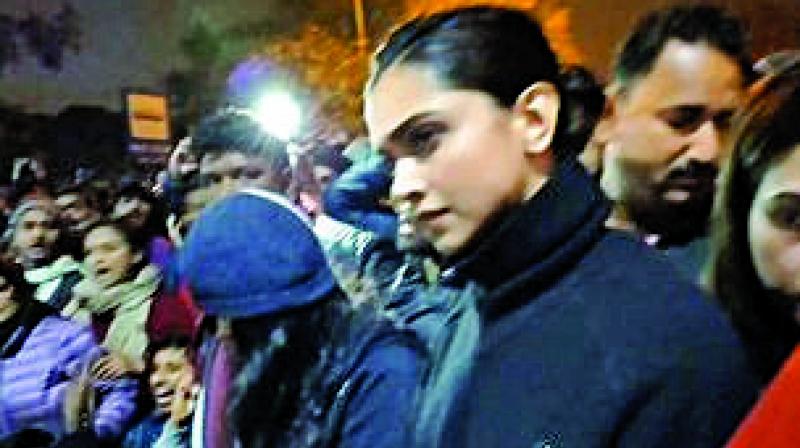 With the ongoing furore over the violence at Delhi’s Jawaharlal Nehru University (JNU) on January 5, citizens have been calling on their favourite celebrities to take a stand. And while many stars have chosen to stay silent or apolitical, Deepika Padukone showed up at the university to express solidarity with students who were injured in violence inside the varsity campus. “I am pained because this might become the new normal, and I am sad and scared because anyone can say or do anything and get away with it. I feel angry that this is happening and action is not being taken. We need to ponder about that,” said Padukone in a media interaction as she visited the Sabarmati Hostel at the JNU campus.

Making a difference
Being the first Bollywood A-lister to show her solidarity with the protests against the violence, after many others like music composer Vishal Dadlani had been to the protests in Mumbai, Padukone has been lauded for taking a stand. Soon after news of Deepika making an appearance at JNU broke, social media was split into two sections. One Twitter user wrote: “This is the face of a strong woman who isn’t afraid to stand up for the right (sic)” with an applause emoji. Another tweeted: “The real greatness comes when you stand with the suppressed. Thank you #DeepikaPadukone.” The micro-blogging site has seen #IStandWithDeepika becoming a trending topic as well.

Meanwhile, Bollywood bigwigs have also spoken up in her favour, including Article 15 director Anubhav Sinha. “I am sure that there are around 15 or 16 people managing Deepika’s work and they would have strongly advised her against it. But she has gone against the will of a lot of people around her to do what she wanted and she needs to be supported and lauded for this. The right-wingers have hired a lot of people who have no clue about what is right or wrong to troll her. She has put her own money on the film to make it and not anyone else and that is why what she has done is very commendable,” he says.

Padukone’s fellow-actors Shabana Azmi and Dia Mirza are also all praise for what they see as her exemplary courage. The veteran actress had taken to social media to tweet, “When she was attacked over Padmavat, very few came forward to support her. She knows what it feels to be targeted and she has shown exemplary courage to support the JNU students. More power to her.” Dia adds, “So proud of her! And so so grateful. May she continue to walk her truth.”

Paying the price
Amidst the praise, many have surmised that the move may be a publicity stunt in lieu of Deepika’s upcoming film Chhapaak, which talks about acid attacks in India.

Veteran publicity expert Rajesh Vasani of Paras Publicity says that the timing of Deepika’s visit before the release of her film perhaps says it all. “It’s just a marketing gimmick to draw media attention and eyeballs, which they have largely succeeded. The funda is marketing ke liye kucch bhi (Anything for marketing),” he asserts. Many have tweeted personal attacks against her as well. “Why do you hate Hindus so much?” asked a furious user. “Never seen #DeepikaPadukone visit URI Martyr’s family. Never seen her visit Pulwama martyrs. Never seen her visit Kashmiri Pandit family. Yesterday’s visit was a cheap publicity stunt (sic)” asserts another.

Additionally, hashtags like #BoycottDeepikaPadukone and #BoycottChhapaak are now trending, with many stating that they had cancelled their tickets for Chhapaak and were now going for the other release of the week, Tanhaji. Deepika had faced a similar backlash from right-wingers when she was playing the role of Rani Padmavati in Sanjay Leela Bhansali’s 2018 film Padmaavat. In fact, an industry veteran in Bollywood goes as far as to equate her JNU visit to the committing of Jauhar.

“It is like Jauhar for an actress of her stature if she decides on supporting someone who has been wronged knowing well that there would be adverse repercussions from certain sections of the industry, media and the public as well. But it is a brave act no doubt and one has to commend it. It can surely affect the collections of her film,” says the source who wishes not to be named.

Changing mindsets
Incidentally, the advance booking received from two multiplexes show over 8,000 tickets booked for Chhapaak as compared to 12,000 for Tanhaji. Well, Chhapaak may not bring in the numbers, but Deepika’s popularity on social media has certainly grown since #BoycottChhapaak took over the Internet. A section of the media reported social media analytics site Socialblade to have found that her Twitter follower count of 29 million has only gotten bigger in the past week. Perhaps this can be attributed to Twitterati coming to Deepika’s defense in the midst of the backlash. One netizen wrote: “Why #BoycottDeepikaPadukone? Why #BoycottChhapaak? Just because Deepika went to JNU against Sunday’s violence? Really guys? Are you now defending violence?”

Vasani adds that whether or not her visit to JNU was for publicity, a change is afoot. “There is one thing that has been positive, in that Modi bhakts (worshippers) have started realising and have started taking a U-turn, following the flow of the wind. Even though Deepika did not say anything, her presence was expressing solidarity with the students,” he opines.

Meanwhile, celebrities who have remained silent include big names like Aamir Khan, Salman Khan, Shah Rukh Khan, Akshay Kumar and Hrithik Roshan. When Aamir Khan stood with Medha Patkar in 2005 on the Narmada dam issue, distributors in Gujarat refused to screen his film Fanaa out of fear of Prime Minister Narendra Modi, who was the chief minister of that state then. Even if this was done for her film’s publicity, the actress does deserve a round of applause for taking a stand at the risk of the predictable backlash.
—Sanskriti Media