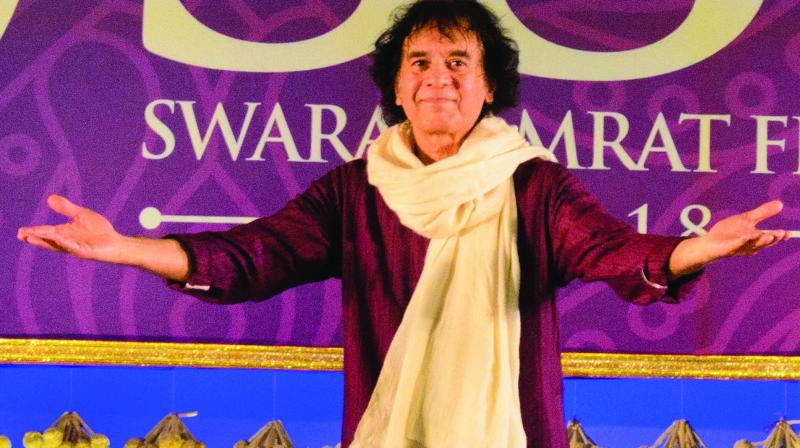 Delhiites are in for a percussion treat today at Kamani auditorium as the unparalleled, iconic musician Ustad Zakir Hussain is presenting two amazingly gifted percussionists - Navin Sharma on the dholak, and Anantha R Krishnan on the mridangam - in an exciting concert. Ustad Sabir Khan will accompany the trio on the sarangi, and will also conclude the concert with Rajasthani folk songs, bringing in a novel element into the performance. The rhythmic play between melodious instruments and a dulcet voice will surely be a treat to listen to.

Anantha Krishnan, grandson of the legendary maestro Vidwan Palghat Raghu talks about the concert and his relationship with Ustad Zakir Hussain. He says, “I have always been fascinated with Ustad ji’s tabla repertoire. Without any planning, I just fell in love with it, after all, Ustadji is Ustadji! I grew up listening to his music.” Anantha also tells us how he met the legendary musician. “I went to Stanford University to a concert of his, with Pandit Shiv Kumar Sharma and afterward, I went up to ask if he taught; he said ‘yeah, I run this workshop’. So I signed up to learn the tabla from him; this was about 6 years ago. There was this big group of about 40 of us; no one knew I played the mridangam. I last went to learn two years ago. I would still love to go but now I have so many other things happening in my life,” he shares.

The musician, who teaches at A R Rahman’s KM Music Conservatory, also reveals how the performance for the concert came about. He narrates, “Eventually Ustadji invited me to play the mridangam at Abbaji’s barsi, (Ustad Allah Rakha Khan, Ustad Zakir Hussain’s father) and I got to play some of the stuff I had learned from him. That perhaps led to his conceiving of this interesting act we do where there is Ustadji, me on the mridangam, Navin Sharma on the dholak, sometimes a drum set player and Sabir Khan on the sarangi. It’s an incredible privilege to engage with him on stage. Navin bhai is a disciple of Ustad Allah Rakha, and he also plays the tabla; I, of course, come from this traditional Carnatic music background but have studied electronic music at the Master’s level”