Aaradhya’s day out with parents Aishwarya, Abhishek in soccer arena

The last time Aishwarya was present at the Nehru stadium was when she performed at the opening ceremony of ISL Season 2. 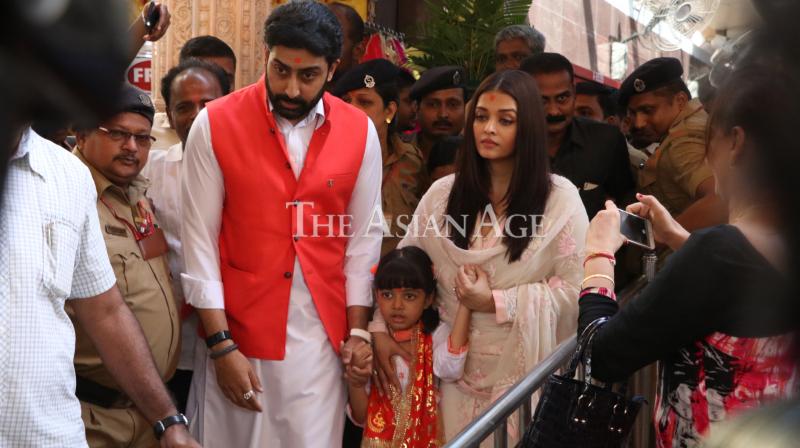 Aaradhya Bachchan with Aishwarya and Abhishek.

Mumbai: Aaradhya Bachchan was the cynosure of all eyes at the Nehru Stadium in Chennai on Sunday evening. The six-year-old, sporting a blue Chennaiyin FC jersey and a wide grin, had a whale of a time with her star parents Aishwarya and Abhishek as the Bachchan family cheered the ISL football team from the stands. Abhishek, a passionate follower of the ‘beautiful game’, co-owns Chennaiyin FC.

Happy Birthday @jejefanai Great way to celebrate your birthday with a superb brace. Keep it up. @chennaiyinfc

A late goal from Delhi Dynamos was to deny the home team what would have been a splendid victory, but it didn’t stop the Bachchan family from doing a lap of honour around the ground. Always the one to acknowledge the support of fans, Abhishek took Aishwarya and Aaradhya along with him to the surprise of the capacity crowd. The last time Aishwarya was present at the Nehru stadium was when she performed at the opening ceremony of ISL Season 2.

Abhishek said Chennai crowd has always been supportive. “They are very fair and come here to enjoy the occasion,” he said. “The presence of team owners will encourage the players. It will show them that we are deeply involved in the club and it is not just a business for us. It is like a family to me,” Abhishek added.

Indeed, celebrity owners have given sporting teams lustre. Cricket was to see an IPL revolution as big biz and Bollywood glamour combined to create a product that became the envy of the cricket world. Many other sports were to enjoy the same support from business and entertainment, with football being one of the prominent ones along with kabaddi, badminton and even table tennis.