In his heydays, Dharmendra often dubbed ‘Garam Dharam’ was known to be an incorrigible ladies’ man. 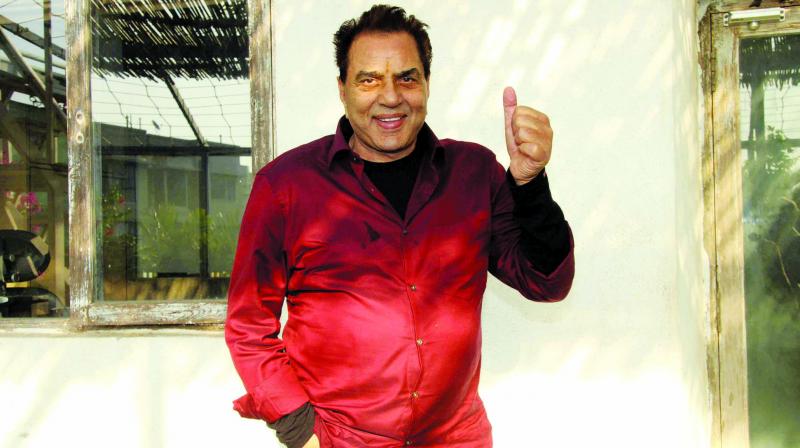 One of Indian cinema’s most beloved stars Dharmendra celebrates his 81st birthday today. It’s a quiet birthday with only close family members around him. “I’ve never liked shor sharaaba. I don’t attend parties and don’t throw any. I am a simple man with simple needs. What keeps me going is not fame, fortune or success but the love of the people. I’ve no hesitation in saying I am loved by one and all. That is my greatest achievement and the only birthday gift every year,” says the affable actor, so natural on screen and in person, you are likely to miss his iconic status in life. “I don’t know about legendary,” he laughly uncomfortably. “When I came to Bombay — that’s what the city was called back then — I only had my dreams. I was an untutored villager, with no idea of acting. I wasn’t even aware I was goodlooking until I began receiving movie offers for my good looks. I’ll always be thankful to filmmakers like Arjun Hingorani and O. P. Ralhan who saw something in me. Now, when I look back, I consider myself so fortunate to have worked with the best filmmakers and the most beautiful heroines of the film industry. For a boy from the village in Punjab, it was a dream come true.”

Among the directors that Dharmendra worked with he singles out Bimal Roy, Dulal Guha, Asit Sen and Hrishikesh Mukherjee as his gurus. “With Bimalda I got to work in one of his finest films Bandini where my co-star was Nutan. We did a few films together. But Bandini is our high point. If, as you say, I was a natural performer with no mannerisms or stylising, it was because I learnt from masters like Bimalda and Hrishida to not ‘act’ in front of the camera, just react.”

With Hrishikesh Mukherjee, Dharmendra was an absolute favourite and part of some of his best works include the classic Satyakam. In fact, at one point of time during the 1970s, Dharmendra was shooting for two films simultaneously directed by Mukherjee. He recalls, “We were shooting for Chupke Chupke and Chaitali. I’d do a shoot with Sharmila Tagore for one, change my clothes and rush for another shot with Sairaji for the other film. Hrishida was very fond of me.”

Dharmendra’s own favourite scene is from Satyakam. “My character, who is suffering from cancer, has lost his ability to talk. I had to convey Satyapriya’s anguish wordlessly, through my eyes only. At some point, my spiritual guru, portrayed by Dadamoni (Ashok Kumar) walks into my room and says ‘Now I can berate you to my heart’s content without any retaliation from you’. The words are bitter but they convey his love for me. I had to express I understood what my guru was saying, and that it was out of sheer love he was admonishing me.” He adds, “Next, my wife, essayed by Sharmila Tagore, who has been a silent witness to my uncompromising life, walks into the room with incriminating papers for me to sign that could relieve my family of poverty. For the sake of my wife and son, I agree to sign the papers. But before I can actually do it, Sharmila snatches the papers out of my hand and tears it apart. My character had to convey his deep, undying love and gratitude for the woman who has stood by his side, through
thick and thin. It was a very tough scene to do. I thank Hrishida for the faith he reposed in me.”

In his heydays, Dharmendra often dubbed ‘Garam Dharam’ was known to be an incorrigible ladies’ man. He laughs shyly, “I remember all my heroines with much fondness as I am sure they remember me: Meena Kumari — with whom I did several films including the big blockbuster Phool Aur Patthar where I became the first Hindi film hero to take off my shirt, Sharmila Tagore — with whom I share my birthday, Asha Parekh — who was a buddy, Mumtaz Tagore — with whom I just did a few films, Mala Sinha, Waheeda Rehman, Zeenat Aman, and of course, Hema.”

The superstar who started his career in 1960 with Dil Bhi Tera Him Bhi Tere has cut down on his work in recent years. “I may not be doing that many films any more. But the love of my people remains undiminished. I was born the he-man of Hindi cinema. I will die the he-man,” he says.