Varun Dhawan and Anushka Sharma have teamed up first time for YRF film that is set to release on September 28. 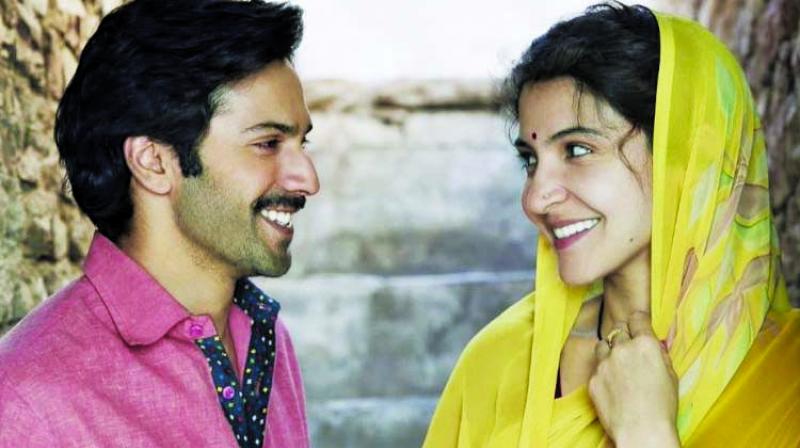 As still from the film Sui Dhaaga - Made in India

For the first time ever, the logo of a Bollywood film has been made by artisans! The marketing team of Sui Dhaaga - Made in India wanted to celebrate the rich and diverse culture of making Indian handicraft. So the team reached out to local artisans and craftsmen from across the length and breadth of the country to create the logo of the film in their unique stitching styles.

“To position our film Sui Dhaaga - Made in India, we realised that it was just not enough to act like a film marketeer. In fact we had to look at ourselves as a team marketing the art and handicraft culture of our country. With this embodiment of our strategy we needed an idea that would be the fulcrum of our entire campaign. And what could be a better idea than inviting the artisans of our country to design the logo of our film. We reached out to 15 uniquely skilled artists/artist groups across the lengths and breadths of our nation who helped us design our film logo. It has been an exhaustive and most rewarding experience for all of us at YRF. It has taken six months to plan, research and execute our logo in 15 different styles that celebrates our country's diversity and entrepreneur spirit.” says Manan Mehta, VP - Marketing and Merchandising, YRF.

The Sui Dhaaga logo has been done in a striking, globally popular Indian hand needlework forms of Kashida and Sozni from Kashmir, colourful Phulkari from Punjab, the intricate thread work forms Rabari and Mochi Bharat from Gujarat, Phool Patti from Uttar Pradesh and Zardozi work from Lucknow. It has also be created in Rajasthan’s prominent crafts like Aari, Banjara and Gota Patti, Tamil Nadu’s popular Toda style and Karnataka’s Kasuti design. Traveling towards the east, which constitutes of over 50 percent of the India’s handloom exports, the film’s logo has been made in Pipli style from Odisha, Handloom work from Assam, Kantha stitch work from West Bengal.

By creating a logo in as many as 15 different needle art forms from India, Sui Dhaaga hopes to create awareness of India’s culture amongst today’s youth and the impact that it leaves on modern design, fabrics and fashion at large. Interestingly, YRF also chose to release to the logo on National Handloom Day that celebrates the magnificence of Indian handloom the world over.

A film about finding love and respect through self-reliance, Varun Dhawan and Anushka Sharma starrer Sui Dhaaga - Made in India is a heart-warming story that celebrates the spirit of self-reliance. The film’s plot is inspired by Mahatma Gandhi’s philosophy and takes a leaf out of the hugely acclaimed Make In India campaign. While Varun plays the role of a tailor, Anushka plays an embroiderer in the film.

Both champion actors, Varun and Anushka have been paired for the first time and are definitely the most-awaited on-screen jodis of 2018. The National Award-winning, dream-team of director Sharat Kataria and producer Maneesh Sharma team up again for Yash Raj Films’ entertainer Sui Dhaaga - Made in India that is set to release on September 28 this year, just before Gandhi Jayanti.