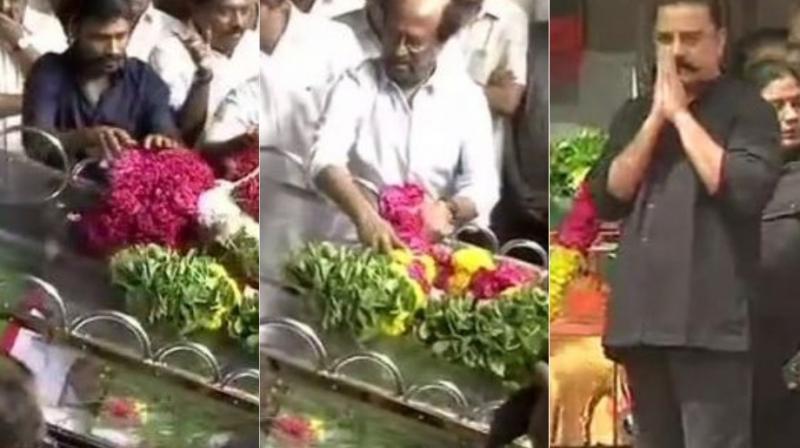 Chennai: The death of DMK chief M Karunanidhi has brought grief not just to the people of Tamil Nadu and other parts of the country, but film stars working in various South film industries.

Several stars from Kollywood turned up in Chennai to pay their last respects as Karunanidhi’s mortal remains were being readied for burial at Rajaji Hall.

Like Karunadhi, the stars who went from films to politics, Rajinikanth and Kamal Haasan were among those who arrived for the last rites.

Rajini was accompanied by son-in-law, actor-director Dhanush and many other stars like Suriya, Ajith, Sivakarthikeyan were also spotted.

On Tuesday, as the news of the demise of the five-time Tamil Nadu Chief Minister and former screenwriter surfaced, social media was flooded with film stars' tribute for the leader and their messages expressing sadness.

Rajinikanth wrote, “This is a black day I can not forget in my lifetime of my artist's day. Let his soul rest in peace.”

Another actor-turned-politician Hema Malini called it as 'irreparable loss.'

India has lost a towering personality, an elder statesman, a seasoned politician in the passing of Karunanidhiji this evening. It is an irreparable loss for the DMK & for Tamil Nadu politics in particular. Indeed, they have lost a guiding light. May his soul rest in peace

Many stars from Kollywood like Madhvan, Siddharth, Hansika, Jayam Ravi, Samantha Akkineni, Kajal Aggarwal, Trisha Krishnan, Vishal, among others took to Twitter to pay condolences to the family and express grief for the leader’s death, calling it an ‘end of an era’, ‘huge loss’ and fall of 'last Tamil Titan.’

Saddened hearing the demise of one of this Nations Most dynamic leader and writer. May his soul Rest In Peace. Condolences to the entire party,family and supporters. pic.twitter.com/8cayC1tCAD

The Last #Tamil Titan has fallen. Former TN CM #MKarunanidhi was an incomparable man. #TamilNadu has lost at once its greatest contemporary political and creative enigma. Our beautiful language #Tamil will miss #Kalaignar #Karunanidhi This void he has left will take ages to fill.

With profound grief I have learnt about the loss of our beloved Kalaignar Dr M Karunanidhi one of the best leaders the country has ever witnessed. I hope God gives courage and hope to the family member and fellow Tamilians to cope with this huge loss #RIPKalaignar

#RIPKalaignar The end of an era !! Over 6 decades . Did the impossible . Will forever be remembered . 🙏🙏🙏 pic.twitter.com/XgUhnZlNfw

Very disturbed by the news of our former Chief Minister of Tamil Nadu, Karunanidhi ji passing away. Such a legend. My heartfelt condolences to his family and the millions who feel his loss. #RIPKalaingar

Your love and support towards us will never be forgotten 🙏🏼 pic.twitter.com/5Yy3LFOYPB

Kalaignar Ayya definitely deserves a place in Marina Beach for his contribution and being a leader for a Political party for 50 years.

I hereby request the Tamilnadu Government to take all efforts possible to allot space in Marina for Kalaignar Ayya's burial #MarinaForKalaignar pic.twitter.com/HXSQ3O1Ez3

A revered politician, a cinematic genius, a fighter for social justice and above all a great human being who redefined Tamil Nadu's political chapter is no more. Strength and Condolences to Kalaignar's family.

End of an era ! Kalaignar was such an essential part of the fabric of Chennai and Tamil Nadu. All of us who've lived there will feel an inexplicable loss. RIP

Deeply saddened to hear the demise of Kalaignar M. Karunanidhi. A strong leader, a great writer and a simple human being. You will be missed sir! #RIPKalaignar pic.twitter.com/2CwPFmlyiY

The country will always remember this Amazing personality and Leader ,,,Kalaignar Karunanidhi ji for his huge contribution to Tamil Nadu.
RIP sir.

Today India has lost one of its tallest leaders. Deeply saddened by the passing away of Kalaignar Karunanidhi ji. Deepest condolences to the family and loved ones 🙏🏽 His contribution to the state of Tamil Nadu, its people has been immense. True Champion of Tamil pride. RIP Sir.