Passion makes you do the unimaginable, says AR Rahman 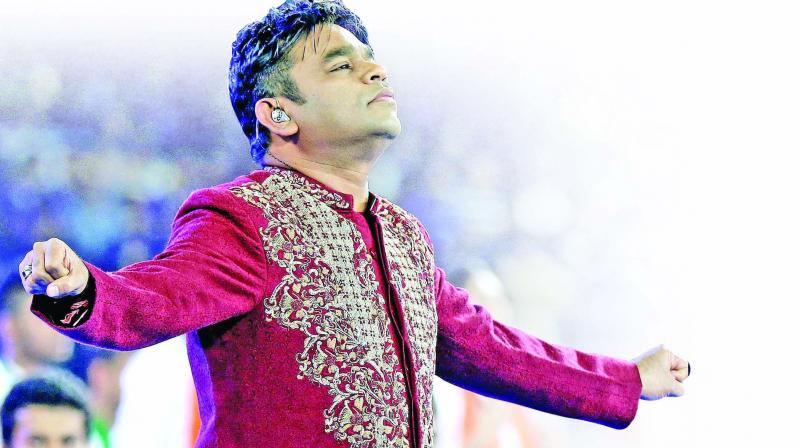 As soon as A.R. Rahman entered the multiplex in the capital for an interaction about his latest venture, his attention veered to the loud music playing at the adjacent movie screen, and he laughed and said, “Baahubali!” recognising the melody in a few seconds.

The 50-year-old music composer is all set to make his directorial debut with the world’s first virtual reality (VR) multi-sensory episodic feature film, Le Musk. Set in Rome, the film revolves around the protagonist Juliet, played by French actress Nora, who has a smell fixation. Its India prelude came after being showcased at the ‘NAB’, Las Vegas, as part of the Intel-Keynote.

The Wi-Fe signal
“In 2015, someone gifted me a VR headset and told me to try it on. But looking at its bulky and weird structure, I shrugged it away. But after three months, I thought that I should at least give it a try and see what it was all about. Rest, as they say, is history. I was hooked. I was plugged into it for 6-7 hours a day. Then I began to study it for another three-four months, and in the process found out a lot of different layers to the device. I went to my wife and told her about the idea of making a movie using this amazing technology. She being an ardent lover of perfumes suggested that I should make a movie based on fragrance. We discussed a couple of ideas and that’s how we came up with Le Musk,” he shares.

‘Filmmaking is tough’
With the making of a film taking up to two years or more, Rahman feels filmmaking is a tough job. “For me, music has always come first, it’s been my first love. Even through this, I have simply reinvented the application of music vis-a-vis an unexplored platform and a narrative. I didn’t have to give it two years of my life. I was able to finish it in 13 days.”

Actors turning singers, directors turning composers, composers turning actors — a fad?
Recently, Kailash Kher and Armaan Malik criticised the idea of actors turning playback singers. Quizzed if he has any opinion about such trends, he smiles and says, “I feel one can do anything. One just has to delve deep into it with passion and focus. Nothing is impossible. Everything in this world belongs to everyone, and not just one or two people. Just do it with all your heart and passion. And if at all someone is judging, then one should judge the other on the basis of sincerity, loyalty and honesty towards a job. Also, always aim for excellence.”

Foreign versus India
There isn’t much difference between India and abroad, feels the musician who has collaborated a lot with international artists. “Everything is changing. There are only two types of people in this world — those who have passion and those who know how to work. And I always go for people who have passion. Passion makes you do things that are unimaginable,” he says, adding, “Values are important. Coexistence enriches creativity. What comes from the heart, touches the heart. I believe in all such stuff.”

What’s next?
Asked if he would like to explore making something as grand as Baahubali on virtual reality, the music composer said, “My next project is even more exciting. I am going to explore different Indian dance forms through virtual reality,” he signs off.