Badla, in spite of Shah Rukh Khan as the producer, is lagging behind in terms of release outlets. 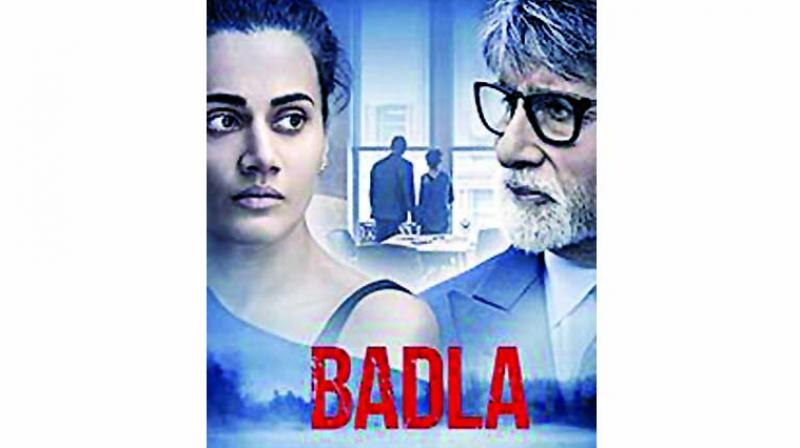 Taapsee Pannu who plays the lead in Badlaa is unfazed by the competition.

Both the films coming this Friday — Badla and Captain Marvel — are out to get blood. But, it seems, Marvel will take centre stage as it gets a much wider release than Badla in India and that too in four languages namely English, Hindi, Tamil and Telugu.

The producers Disney expect the film to crack open the box-office.

Says a source from Disney, “Captain Marvel is Marvel’s first woman superhero film. And, we  expect it to be every bit as successful all across the world as DC’s Wonder Woman.” In India, Captain Marvel gets optimum screens and theatres.

Badla, in spite of Shah Rukh Khan as the producer, is lagging behind in terms of release outlets. Apparently, it is getting only 700-750 screens across India which is a shockingly low number considering Amitabh and Taapsee Pannu have starred in the game-changing Pink and the director Sujoy Ghosh has to his credit a hit like Kahaani. Admittedly, Sujoy’s other films, including his last release Kahaani 2, were thundering flops.

Trade pundit Amod Mehra is optimistic. “Badla being a suspense thriller from the stable of Sujoy Ghosh is a much-awaited film. Though the producers are planning a limited release with just 750 screens, the film should do well at the box-office.”

Adds trade analyst Atul Mohan, “This week should be exciting. First big release from Hollywood of 2019 and a whodunit thriller from Red Chillies. Badla may not be looking for as wide a release but the budget of this one is controlled one and should reap good profits for the makers. Captain Marvel is looking to score good, and as I said, this is the first big title from Hollywood this year. And, Hollywood made around 900 crore from the Indian box-office last year.”

Says trade analyst Girish Johar, “Badla has big names attached to it. Big B sir (Amitabh Bachchan), Taapsee, Sujoy and Shah Rukh Khan are backing it. It has surely raised the curiosity level. The trailer has been liked by the audiences and has got a decent intrigue value to it as well. The bandwidth of the Badlaa audience is limited, though, ranging from niche and high-end in top cities of the country and will be strongly dependent on its WOM (word of mouth) to carry it through the day and over the weekend.

Girish Johar admits Captain Marvel is formidable competition for Badla. “Captain Marvel... what to say... is a PROUD film from the MARVEL ENTERPRISE. It has FANTASTIC production values, superb trailer, great international buzz and hype backing it. The film is being released in regional languages as well and has got good traction from its youth and metro audiences alike. Combined all languages... it has all the chances to lead at the box-office on Friday and over the weekend by a good margin, keeping behind all the competition.”

But, Taapsee Pannu who plays the lead in Badlaa is unfazed by the competition. “I am a huge fan of Avengers and Marvel films. But, I have no impression of Captain Marvel as an audience so that’s why it’s not as bothersome as Avengers or any other established super-hero will be.”

Besides, hasn’t Taapsee played the superhero in Naam Shabana, Baby and Pink?