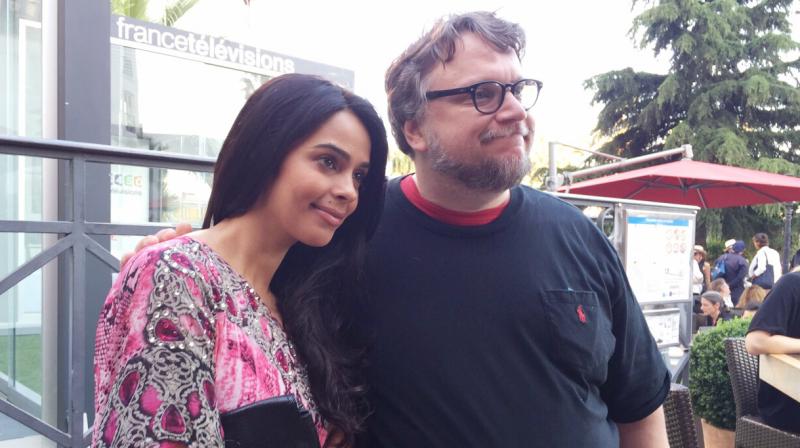 Mumbai: Mallika Sherawat who has been closely associated with eminent international biggies like Jackie Chan, Barack Obama and Bill Gates to name a few has some good news for her fans. The prominent actress recently met the Oscar-winning filmmaker Guillermo del Toro in Los Angeles.

Producer/Director Guillermo del Toro who is known for his dark fantasy films won two Oscars, the Best Picture and Best Director Award for his film ‘The Shape Of Water’ at the 90th Academy Awards. The two celebrities spent a lot of time discussing about films at length with the filmmaker revealing his love for Bollywood films to the beautiful diva. The filmmaker was introduced to Bollywood films by his wife who also loves Bollywood musicals with all the song and dance. He further went on to express his wish to make his Bollywood debut with a musical film.

Mallika who has been in love with the filmmaker’s work ever since she first watched his film ‘Pan’s Labyrinth’ was in awe after watching the recently released Oscar-winning film ‘The Shape Of Water’ which also is one of her favorites. She asserts that it was an unforgettable moment to meet him.

When asked Mallika about her experience meeting with Guillermo, she says, “I have been a huge admirer and in love with his work ever since I watched ‘Pan’s Labyrinth’ and have become his fan ever since. I had the opportunity to meet him. He expressed his love for Bollywood cinema and the fact that he would love to do a Bollywood musical someday. Meeting and discussing films with him is like a dream come true and one of the most memorable experiences I am going to cherish.”