For starters, Kajal will soon be seen in Mumbai Saga, paired opposite John Abraham. 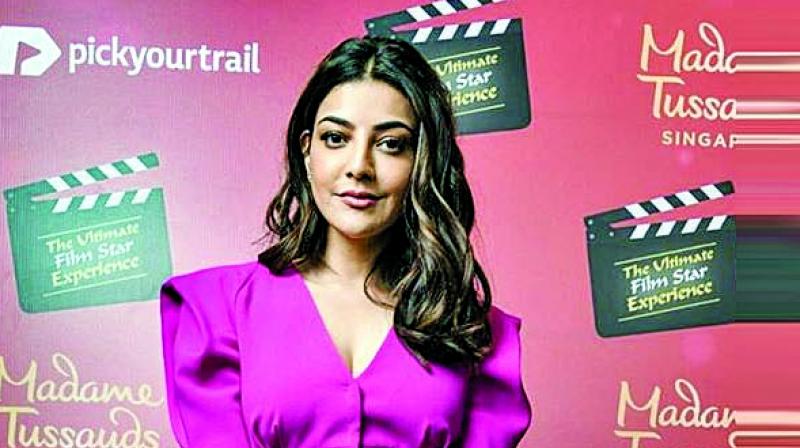 From her Bollywood debut in Kyun! Ho Gaya Na to her soaring Bollywood, Tollywood and Kollywood successes, Kajal Aggarwal has certainly come a long way.

And her plate is still only running full. For starters, Kajal will soon be seen in Mumbai Saga, paired opposite John Abraham. Additionally, she’ll be seen in Indian 2 with veteran actor Kamal Haasan, which is being shot at blitzkrieg speed. While she tells us that she cannot talk much about her role in Indian 2 other than that it’s an exciting one, she shares that in Mumbai Saga is in its post-production stage, in which she plays a head-strong Maharashtrian girl who’s a very instrumental character in the film.

As if that wasn’t enough, Kajal Agarwal will soon be immortalised at Madame Tussauds Singapore in partnership with the International Indian Film Academy Awards (IFFA).

The learning curve
For Kajal, however, the learning is still on. “My journey in the industry was an emotional yet a very adventurous one, but I feel I still have a long way to go and a lot more learning to do,” she tells us.

So did Kajal always want to become an actor, we ask her. Never, she says simply. “It took me seven movies to fall in love with what I was doing, but I took my job very seriously from the first day.”

In fact, for Kajal, who grew up in a protective family, learning came from the exposure she got while working on the above seven movies. “Growing up in South Mumbai, I never stepped out of the house,” she recalls. “And no sooner than I started working, I was in the interiors of South India, in Madapalli. I couldn’t relate to anything and had to start learning everything from scratch, as if.”

Besides Mumbai Saga and Indian 2 on shoot mode, what else is up for her at work? “I just shot for a web series called Life Telecast, which is my debut in that space and will be telecast on an OTT platform in mid-Feb. Additionally, I have a film in Telugu film called Mosagallu, which has already completed its shooting schedule.

Forever more
As for her Madame Tussauds honour, she talks about how she came upon the news. “I got a message about it in March 2019. I was very busy at a meditation camp with my parents, so I did not think the message was genuine. I honestly thought someone was playing a prank on me. A few days later, I got another SMS saying they needed my email address. I thought that was harmless and shared it. I got the official invite on the email when I was in Hyderabad, which is when believed the possibility of it being true,” shares Kajal with a chuckle. “And thus began the excitement. I was emotional and overwhelmed, and fifteen days after receiving the email, I called my family. Everyone was proud and emotional.”

So does Madame Tussaud Singapore in partnership with IFFA immortalising her feel as if she’s in seventh heaven, we ask her. Kajal simply chuckles and says, “There’s no time to be floating on the seventh heaven, really, because I am back to Chennai. But jokes apart, this gesture by the film industry overwhelms me with joy and gratitude. I am also proud and happy.”