Puri subdued the attacker to prevent further strikes, took Shah to the hospital in a police van, and saved his life. 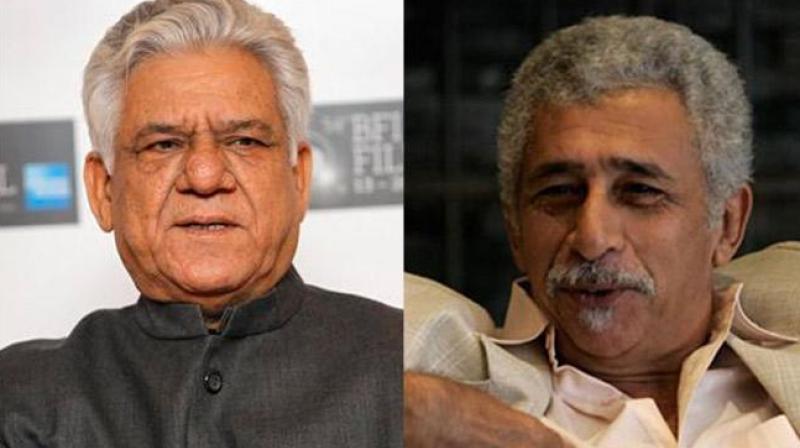 Shah has stated that Puri was suffering health wise over the last few years.

Mumbai: That Om Puri was a close friend of Naseeruddin Shah is well-known, but little is known about the time when the ‘Ardh Satya’ actor saved the latter's life during a knife attack.

The incident during which Jaspal, one of Shah's former friends stabbed him with a knife at a restaurant, finds mention in Shah's autobiography 'And Then One Day: A Memoir'.

Shah writes in the book that Puri, who passed away recently following a cardiac arrest, had jumped across their dinner table, subdued the attacker to prevent further strikes, took Shah to the hospital in a police van, and saved his life.

"While the shooting for 'Bhumika' (1977) was on, Om and I were in the middle of dinner when Jaspal, whom I had kept well away from for some time now, also entered and greeted Om. We ignored each other but, eyes fixed on me, he passed to sit on another table behind me, so I thought.

"After a while, I was reminded of his presence by what felt like a short sharp punch in the middle of my back. I started to rise, wearily preparing myself for another free-for-all. Before I could move, Om with a strangled cry lunged at something behind me. I turned to see Jaspal holding a small knife, its point dripping blood, his hand raised to strike again, and Om and two others grappling to subdue him," he narrates the episode in the book .

As a debilitated Shah struggled with pain, Puri dealt with Jaspal and argued with the hotel manager who refused Shah to be taken to the hospital until the police arrived.

"Om returned to inform me that Jaspal had been taken to the kitchen and was being given the treatment. He wanted to take me to a doctor but was thwarted by the restaurant staff refusing to let us move till the police arrived.

"A sizeable crowd had collected by now, the muscle in my back was beginning to go into spasm, blood was soaking my shirt back and had begun its progress down my trouser seat," Shah writes in the book.

He recalls how Puri had riled the policemen by climbing into the police van without permission before the ‘Ishqiya’ actor was taken to the hospital in a bleeding condition.

"Om made the cardinal error of climbing in as well without permission and managed to rile the boss-man, thereby asking the cops to be gentle with me. He was ordered to get off and after considerable pleading with the goon in charge was allowed to stay. Neither of us had an idea where we were headed but I prayed it was not the police station.

"The bleeding had not seized, the pain was getting intense and these cops obviously had not quite understood the situation.  After a few cursory questions to us, and some garbled transmissions over the radio in Marathi, we arrived at Cooper Hospital in Juhu," the memoir notes.

Shah said he was thankful to his "guardian angel" that Puri was present during the incident to take charge and save his life.

Both actor, who were among the most prominent faces of the 'new wave cinema'(1980s), not only worked together in several films like ‘Maqbool’ and ‘Jaane Bhi Do Yaaron,’ but also studied together at the National School of Drama (NSD) and Pune's Film and Television Institute (FTII).