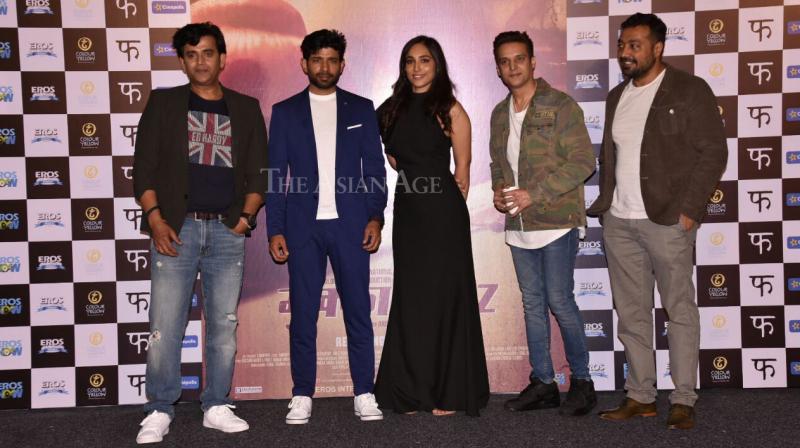 The cast and crew at the trailer launch. (Photo: Viral Bhayani)

Mumbai: Anurag Kashyap's production 'Mukkabaaz' is making all the right noises today. It is a story that is driven only by the content, which Anurag almost specializes in.

The makers released an announcement video and a song 'Paintra' which revealed the plot of the movie. 'Mukkabaaz' is about a boy (Vineet Kumar Singh) who falls in love with a Brahmin girl (debutante Zoya Hussain) and takes up boxing later, calling it his passion.

But it is not only the story of a boxer in love. The story has many layers attached, like with Ravi Kishan, who plays the coach, or Jimmy Sheirgill who portrays the role of a don in the movie.

The trailer has some interesting moments and dialogues.

You can watch it here:

However this was a movie where the makers revealed the story through a song before anything else.

Ravi Kishan begs to differ from the opinions about the movie saying, "'Mukkabaaz' might appear like the story of a boxer, but it is a love story."

Jimmy Sheirgill too mentioned, "Launching a song before has been a unique marketing strategy. I feel there's always a good result to it. So I'm keeping a positive thought."

'Mukkabaaz's co-producer Aanand L Rai in fact revealed at the trailer launch that Anurag Kashyap used to take Rs. 50 from everyone in his office who heard the song before release.

The lead actor Vineeth Kumar Singh has worked hard towards the role. "When Vineet came to me with the script, I told him to become a boxer. He left immediately, trained and came back after a year."

Vineet's journey wasn't easy even then. The former assistant director to Mahesh Manjrekar was outrightly declined to even be appreciated in the room as a trainee boxer. He was instead made to sweep the floors everyday, and the actor would just wait to be noticed.

He said, "I was a doctor. It was only dreams that got me here."

The movie also brings together two men of different thoughts when it comes to filmmaking. We're talking about Anurag Kashyap and Aanand L Rai.

Speaking on the same, Aanand said, "I wanted to associate with Anurag since long. He helped me make Tanu Weds Manu. Me and Anurag have the same intention when making a film, so it all worked out."

Anurag also mentioned how sports has been looked down upon. He said, "My father was a coach but we as children couldn't even think about it as a career option."