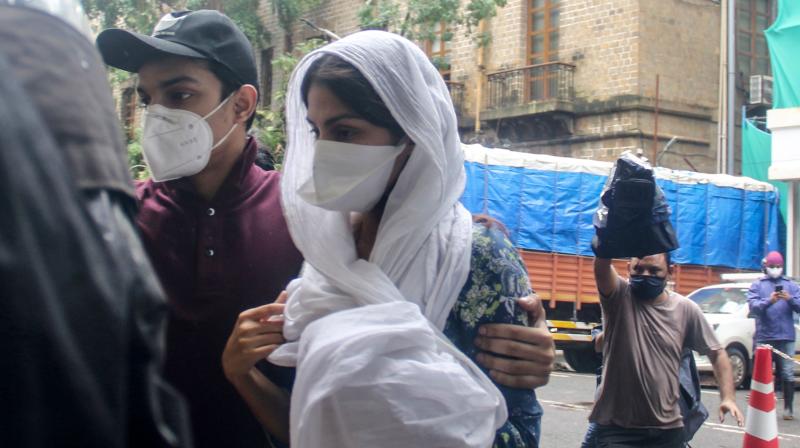 Mumbai: Actor Rhea Chakraborty, accused of abetting suicide of actor Sushant Singh Rajput, appeared before the Enforcement Directorate (ED) here on Friday in connection with the money laundering case lodged by it.

The ED has also summoned for questioning Shruti Modi, who is Chakraborty's business manager, and Rajput's friend and roommate Siddharth Pithani in connection with the money laundering probe stemming from a complaint filed by his father with the Bihar Police in connection with his death, officials said.

They said the two are accused in their case and their statements will be recorded under the Prevention of Money Laundering Act (PMLA) once they appear on their scheduled dates for Friday and Saturday respectively.

Pithani is stated to be out of Mumbai at present and he has said in various news channel interviews that he was present in the Bandra flat on June 14 when the 34-year-old actor hanged himself.

The IT professional, stated to be living with Rajput for about an year, had earlier recorded his statement with the Mumbai Police as part of their accidental death report (ADR) probe in the case.

Chakraborty (28), accused by Rajput's father of abetting his son's suicide, appeared before the ED at the agency's office in Ballard Estate here on Friday after initially refusing to do so, citing her appeal pending before the Supreme Court.

"In view of the fact that the ED has informed the media that the request to postpone her attendance is rejected, Rhea has appeared before the ED office," her advocate Satish Maneshinde said.

She was accompanied by her brother Showik.

Chakraborty has filed a petition in the apex court requesting that the case lodged by the Bihar police against her be transferred to the Mumbai police. The plea will be heard next week.

The agency is expected to question Chakraborty, , who stated in her petition to the court that she was in a live-in relationship with Rajput, about her friendship with the actor, possible business dealings and the developments that took place over the last few years between them and record her statement under the PMLA.

It is expected that the ED's line of questioning would revolve around Chakraborty's investments, business deals and professional deals and links.

A property located in the Khar area of the city, linked to Chakraborty, is also being probed by the ED for the source of its purchase and ownership.

The agency has already questioned Rajput's Chartered Accountant (CA) Sandeep Shridhar and his business manager and staffer Samuel Miranda twice in the case.

Rajput's father had, in his complaint, alleged that Miranda was hired by Chakraborty after she allegedly fired the staff hired by his son.

Rajput's 74-year-old father K K Singh, who resides in Patna, had on July 25 filed a complaint with the Patna police against Chakraborty, her parents (mother Sandhya Chakraborty and father Indrajit Chakraborty), brother Showik, Miranda and Modi and unknown persons accusing them of cheating and abetting his son's suicide.

The CBI had re-booked this FIR as a fresh case on Thursday and named as accused the same persons.

The Mumbai police has been carrying out a separate probe in Rajput's death and has questioned a number of prominent film producers and directors till now.

The father had also alleged financial irregularities in bank accounts of his son.

In the complaint, Singh alleged that Rs 15 crore was siphoned off from Rajput's bank account in one year to accounts of persons not known or connected to the late filmstar.

Under the ED's scanner are at least two companies linked to Rajput and some financial deals involving Chakraborty, her father and Showik who are stated to be directors in these companies.

The Supreme Court Friday dismissed a PIL seeking a CBI or NIA probe into the death of Bollywood actor Sushant Singh Rajput, saying "strangers" are "unnecessarily" coming when his father is pursuing already pursuing the case.

Mumbai police has been probing the case and recorded statements of 56 people including Bollywood directors like Aditya Chopra, Mahesh Bhatt and Sanjay Leela Bhansali.

A bench comprising Chief Justice S A Bobde and Justices A S Bopanna and V Ramasubramanian junked the PIL filed by Mumbai-based law student Dwivendra Devtadeen Dubey on the issue.

"Deceased father is pursuing the case. There is no reason that he will not pursue it properly. You are a stranger in this matter and you are unnecessarily coming in this. We will not permit this," the bench said.

During the brief hearing conducted through video conferencing, the apex court was informed by Solicitor General Tushar Mehta that the CBI has taken over the investigation in Patna case.

"One case is lodged in Mumbai and other in Patna. The Bihar government had requested for CBI probe and we agreed," he said, adding that the Mumbai case has not been transferred to the CBI so far.

Dubey, a law student, had sought the transfer of the FIR, lodged by Sushant's father Krishan Kishore Singh at Rajiv Nagar police station in Patna either to the CBI or the NIA to ensure that the investigation is carried out impartially, effectively and efficiently.

Earlier during the day, the Bihar government filed an affidavit in the apex court seeking dismissal of Bollywood actress Rhea Chakraborty's plea for transfer of the Patna FIR against her to Mumbai in actor Rajput's death case terming it "premature, misconceived and non-maintainable".

The apex court had on July 30 junked a similar PIL seeking transfer of probe into Rajput's death case from Mumbai police to the CBI.

"Go to Bombay High Court if you have anything concrete to show," the court had said while dismissing the PIL.