Entertainment   Bollywood  07 Jul 2017  I'm excited to meet him for the first time: Taapsee on working with Salman in Judwaa 2
Entertainment, Bollywood

I'm excited to meet him for the first time: Taapsee on working with Salman in Judwaa 2

The actress has completed most of the shooting of the film and will now be sharing screen space with Salman. 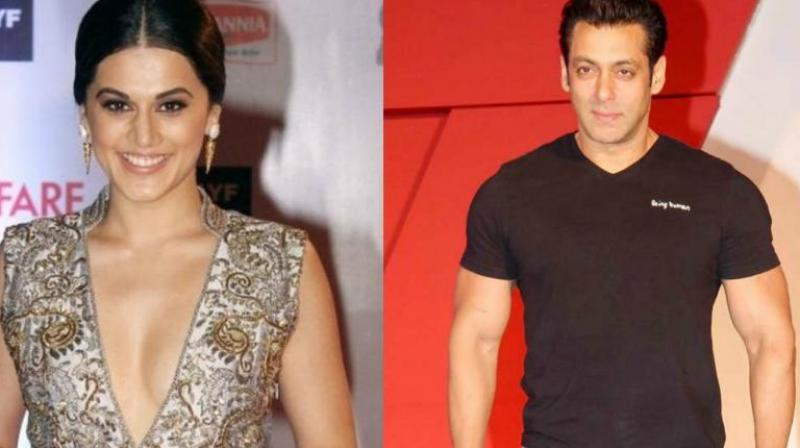 After Akshay Kumar, Taapsee Pannu will be sharing screen space with another superstar, Salman Khan.

Mumbai: Actress Taapsee Pannu has wrapped up shooting major portions of her upcoming film ‘Judwaa 2’ and is now looking forward to shoot with superstar Salman Khan.

‘Judwaa 2’ is a sequel to the 1997 hit film ‘Judwaa’ which starred Salman in a double role. In the second installment, Varun Dhawan reprises the role of the superstar.

When asked how is the film shaping up, Pannu told reporters, "The shooting is going good, it's about to get over. Two songs and a scene with Salman are left. We will shoot that soon... I am very excited to meet him, it will be my first time, and to share screen space with him."

The actress recently shot two songs for the movie which were retained from the original, ‘Oonchi Hai Building’ and ‘Tan Tana Tan’.

‘It was so much fun shooting 'Oonchi Hai Building' and 'Tan Tana Tan', I didn't want the shoot to end. These are the songs I grew up listening so I can dance on them for days,’ she said at Sportsperson of the Year award event here on Thursday night.

Pannu said if not a movie star, she would've loved to be a sports personality as she admires them a lot.

"I feel if I had gotten a chance or had some sports skills, I would've definitely tried to be a sports star instead of an actor. I am a sports lover and admire it very much, because the way they play under pressure, with no retakes, representing the country, all of them are big heroes for me."