Smiles are back: Janhvi celebrates 21st birthday in old age home and with family

Janhvi and other members of the family were seen smiling for the first time after the devastating death of Sridevi. 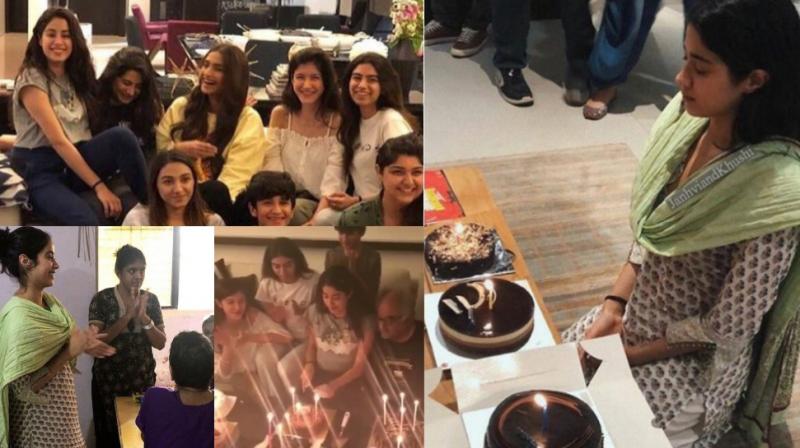 Pictures of Janhvi celebrating her birthday was shared on her Instagram fan clubs.

Mumbai: The last 10 days have been extremely daunting on the Kapoor family after the devastating demise of veteran actress Sridevi in Dubai on 24 February.

After the troubles associated with bringing back her mortal remains and bidding her goodbye with the last rites, the family members’ lives are gradually swinging back to normalcy.

Janhvi’s 21st birthday on Tuesday provided the first opportunity for the Kapoor family to smile.

Jahnvi celebrated the occasion in a centre for the elderly and children in Mumbai, reportedly a tradition inculcated in her by her mother.

The kids and the elderly are seen singing the ‘Happy Birthday’ song to her in the  video, and she also cut multiple cakes with them.

Janhvi Kapoor celebrated her birthday at an old age home. My princess. We love you. @janhvikapoor

As this day has come to an end, all I asked for is to see Janhvi smile on her birthday. I prayed and I got it. Happy birthday Janhvi, love you. @janhvikapoor

Later in the day, there were more cakes to cut, this time with father Boney, sister Khushi, half-sister Anshula, cousin Shanaya and others.

Sonam Kapoor shares this beautiful boomerang. This is what families are for. @janhvikapoor @sonamkapoor @anshulakapoor @khushi05k

Her other cousins Sonam and Rhea were also present during the celebrations, with the former sharing this snap on Instagram of all the cousins being all smiles.

It’s heartening to see Anshula also being a part of the celebrations considering the past equations between the two families. Her coming out in support of Janhvi on Instagram and latter following her back, had proved all was well between them.

Only person who could have made the picture complete was Arjun Kapoor, who is shooting for ‘Namastey England’ in Punjab.

Looking at the smile on her face, it seems likely that Jahnvi might resume shooting of her debut film ‘Dhadak’ soon.