The actress further reveals that Andrew loves it whenever she wears a sari. 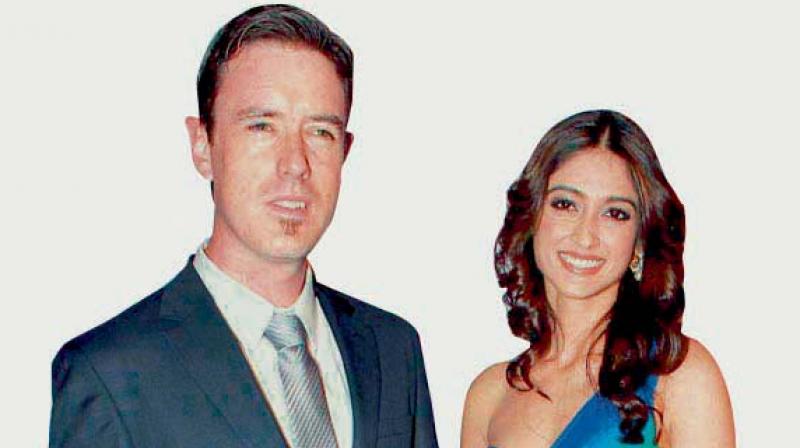 A beaming Ileana D’Cruz opens up about her relationship with boyfriend (and rumoured husband), revealing the things the couple love about each other.

In December, when Ileana D’Cruz shared a picture of herself on Instagram, mentioning in the caption that it was taken by “hubby” and tagging long-time boyfriend and aspiring photographer Andrew Kneebone, it got her followers and the media in a tizzy. As the news of her apparent secret wedding caught fire, the 30-year-old was repeatedly questioned about her marital status but she always gave confusing responses.

And when we asked her whether she’s married, the actress said just one word, “No!”

Following a promotional activity for her upcoming film opposite Ajay Devgn, Raid, based on a real story, the actress enters the room and is all smiles. Ileana also blushes every time a question regarding her relationship with Andrew pops up.

“I am in a very happy space nowadays. I do not wish to talk specifically about my relationship with Andrew everywhere, that’s why I quickly put it up on Instagram. These photographs speak for themselves,” says Ileana.

When asked whose keeping her happy these days, she quips, “Well… it’s Andrew! Who else? My work too. This phase of my life is  very good. Life is just great going man!”

Stating the things she loves about her partner, the actress says, “It’s not possible for me to choose any one quality. It may sound very filmy but let me tell you the very first day when he spoke to me on the phone, I felt something for him. Something was there which attracted me to him. I also love his ‘commitment’. Andrew is very committed to me and I admire this quality the most. I am sure he will never do anything to hurt me.

“He says, ‘you do things which delight me in 1,000 ways.’ He is nice with words. He has often penned me a few love letters which I find romantic.”

Interestingly, Ileana has no hiccups if Andrew decides to come to India to take up photography as a full-time profession. “Andrew is really good at clicking photographs. I would love to see him here,” she shares.

The actress further reveals that Andrew loves it whenever she wears a sari. “Yes! Irrespective of being a firang! When he saw Mubarakan and Baadshaho he said, ‘Dude, you look hot in a sari! Also, for this Diwali when I draped a sari, he loved it. Whenever I drape a sari, he really goes gaga over me,” she reveals.

Ileana also believes that a way to a man’s heart is through his stomach. “I love cooking! Andrew loves green moong dal. He feels it tastes better than any non-vegetarian stuff. I often cook it for him,”she mentions.

Being in a relationship, Ileana feels that everyone deals with their partner in a different way. “In real life, it’s different. I’ve seen my mom and dad share a wonderful relationship. I was in awe of them and surprised at the way they functioned. In a relationship, you make your own rules and the equation differs from couple to couple,” she feels.

On balancing family and work lives, Ileana shares, “It takes will power to strike a balance between personal and professional levels. It is indeed a very tough choice. I do care for both equally. It sometimes does become crazy. I need to go on a break at short intervals as I am very close to my family and cannot be without them for long periods. I plan my holiday time and work schedule very carefully. If I miss on a bit of my work, it’s fine with me and I am sure I will not regret anything at a later stage in life.”

Ileana is not the only actress whose boyfriend is an Australian. Many stars, including Shruti Haasan and Preity Zinta, are in a very happy relationship with their firang  partners

Happily ever after
The Veer-Zaara actress, Preity Zinta, recently shared an adorable picture with husband Gene Goodenough on Instagram and captioned the picture, “A lover, a partner, a husband, a best friend. I can’t believe that I have all rolled into one! Thank You for always being so wonderful & yes You’re the only one I want to annoy for the rest of my life (sic).”

Out of a fairytale
Former Miss India and Bollywood actress, Celina Jaitly keeps sharing pictures along with husband Peter Haag. The couple, who are blessed with twins — Winston and Viraaj, welcomed another set of twins — Arthur and Shamsher — last year.

Made for each other
Powerstar Pawan Kalyan met Anna Lezhneva, a Russian national, while shooting for his movie Teen Maar. They tied the knot in 2013 and are blessed with two children Polena and Mark Shankar Pawanovich.

In a happy space
Actress Shruti Haasan has been spotted with her boyfriend Michael Corsale, who is a London-based actor, many times. In a recent interview Shruti revealed that she wants to keep her relation private and is in a happy space with Michael.

A new chapter
Reportedly, actress Shriya Saran has been dating Russian sportsman-businessman Andrei Koscheev. If rumours are to be believed, the couple might get hitched this year in Udaipur, Rajasthan.