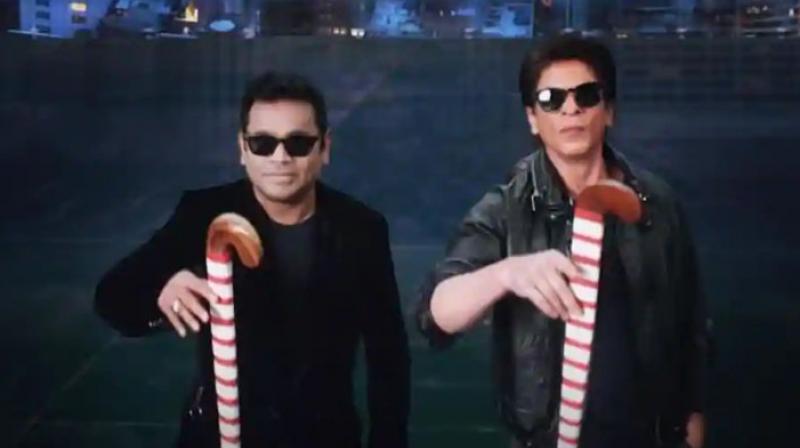 Mumbai: Music maestro AR Rahman, who launched the Hockey World Cup 2018 anthem titled ‘Jai Hind India’ today stated that the song is not limited to a sport but is a tribute to India.

The video of the song was launched in Mumbai on Wednesday in the presence of Grammy award winner Rahman and Odisha Sports Minister Chandra Sarathi Behera.

Finally, the wait is over. Here is the official music video 'Jai Hind India' along with @iamsrk, the song for Hockey World Cup 2018 🇮🇳 https://t.co/hvbHrSGwIP@nupur_mahajan @Naveen_Odisha #GulzarJi #Nayanthara

When asked what inspired him to work on this anthem, Rahman told ANI, “I was quite intrigued when the Chief Minister of Odisha wanted this to happen. He has a lot of goodwill, I have seen how people respect him and what he wanted to do for hockey, which is our national sport. Then when Gulzar ji came into the picture, he gave me these two lines, which were really beautiful. I felt this is not only for hockey, but it’s for India. It is beyond a sport. Actually, we are doing a song for India.”

Sharing his experience, he further said, “I was very lucky that I had the time and the energy and the support from the government to do this.”

The anthem has been composed by AR Rahman and sung by the singer himself along with Nakul Abyankar and MC Heam. The lyrics of the song have been penned by veteran lyricist Gulzar.

Rahman could be seen with Indian hockey players and celebrities like Shah Rukh Khan, Sivamani and some Indian Hockey players in the music video.

The teaser of the song dropped a few weeks back. As soon as the promo video was released, Odisha Chief Minister Naveen Patnaik thanked the Grammy award-winner in a tweet stating that the catchy teaser captured the excitement and euphoria of Hockey lovers across the country.

The hockey tournament started on November 28 and will end on December 16.

A total of 16 countries are participating in the 14th edition of the event. This is the third time that India is hosting the event after having organised it in 1982 in Mumbai and in 2010 in New Delhi.