The crematorium ground was filled with his fans and friends, who attended the funeral with umbrellas and raincoats. 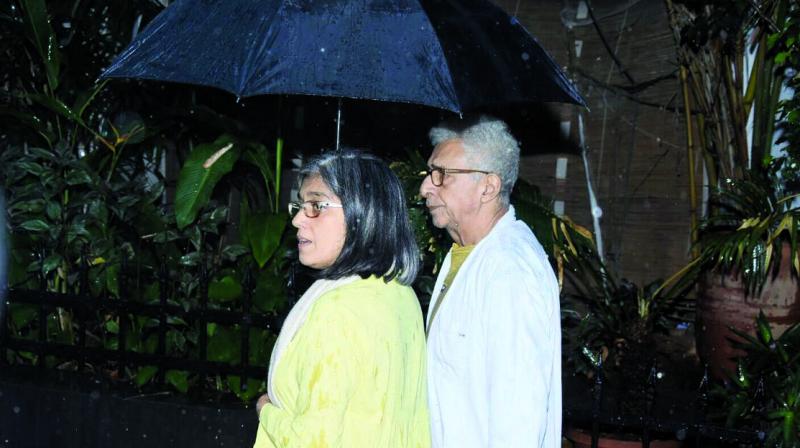 The last rites of veteran actor Shashi Kapoor took place on Tuesday afternoon at Mumbai’s Santacruz Hindu crematorium. Shashi passed away at the age of 79 on Monday evening at Kokilaben hospital, after a prolonged illness.

The actor’s body was draped in a tricolour and he was also honoured with a three-gun salute in the presence of his family and the entire film fraternity, which was followed by a minute’s silence.

His children Kunal, Karan and Sanjana Kapoor were present at the funeral to bid adieu to the actor.

The crematorium ground was filled with his fans and friends, who attended the funeral with umbrellas and raincoats.

Saif, who is married to Shashi’s grand niece Kareena Kapoor Khan said, “I used to call him uncle. I was very close to him. It’s not only a loss for our family but for Bollywood.”

Amitabh, who has shared the screen space with Shashi in quite a few films, took to his personal blog to express his feelings for the late actor. “Standing elegantly without a care in the world, I saw him standing by a Mercedes Sports car, a convertible, a smart trimmed beard and moustache, adorning involuntarily, the face of this incredibly handsome man. It was a picture that filled almost an entire page of a magazine (sic),” he wrote.

“I said to myself, as very uncertain thoughts raced through my mind of wanting to become a film actor, that, with men like him around, I stood no chance at all...”

“I had visited him on occasion in Hospital during some of the times he had been hospitalised earlier... But I never went to see him again... I would never have... I never ever wanted to see this beautiful friend and ‘samdhi’ in the state I saw him in hospital (sic).”