The video featured several actors and actresses from the industry talking about each of Gandhiji’s beliefs. 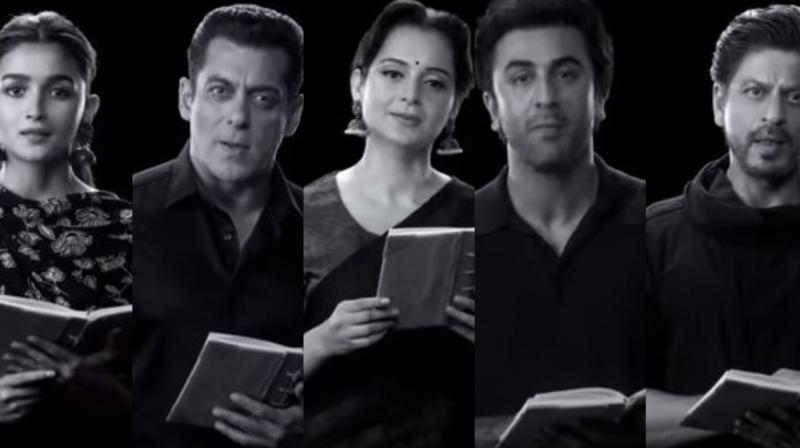 Mumbai: On the occasion of Gandhi Jayanti, Rajkumar Hirani made a special video to commemorate "His 150th birth anniversary"; the video featured several actors and actresses from the industry talking about each of Gandhiji’s beliefs.

Starting with Aamir Khan who spoke about Non-violence, Gandhiji's most famous lesson was of non violence and he chose Aamir Khan for being the simple reason that, he is one of the most down to earth and non controversial actors in the industry.

The next person was Alia Bhatt who spoke about courage. The actress has come a long way in the industry against all odds; that adds up and made her the perfect example for courage.

Following that was Salman Khan who talked about service and serving others; the actor is a humanitarian and has on many occasions worked to help those in need with his Being Human foundation.

Kangana Ranaut talked about belief as the actress is one of the most prominent ones in the industry and has always abided by her own beliefs.

Ranbir Kapoor talked about peace and how it is important to make sure there is peace among others, one of Gandhi’s most followed thought.

Sonam Kapoor focused on how thoughts are important in shaping a person.

"Truth" being one of Gandhiji’s most prominent and enforced thought, Vicky Kaushal spoke about the importance of truth in one's life.

And last but not the least, Shahrukh Khan talked about faith and how it is an important driving factor in a person's life.

Rajkumar Hirani made this video to remind people about Gandhiji’s teachings and how important they are.

The director collaborated with some of the most influential celebrities in India and has certainly made the impact on people.