JP Dutta's Paltan, the movie based on the war at Nathula pass for Sikkim, is all set to release tomorrow. 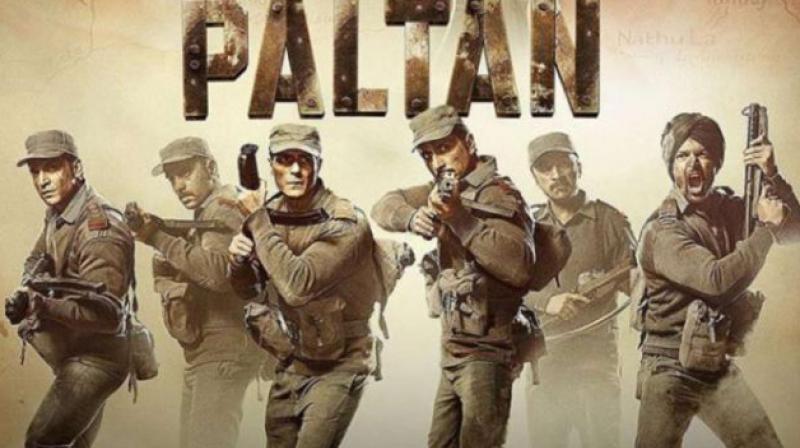 Paltan, the movie based on the war at Nathula pass for Sikkim, is all set to release tomorrow and it is being presented by none other than the helmer of war films like Border and LOC Kargil. In fact with Paltan, JP Dutta will complete his war trilogy.

The Asian Age got an opportunity to interact with the actors from the film – Arjun Rampal, Sonu Sood, Gurmeet Choudhary and Harshvardhan Rane. Here are the excerpts from a very interesting and candid chat with them:

Signing Paltan, did you feel the pressure from first two war films – LOC Kargil and Border?

Arjun: I never feel pressurized. My whole family is in the army. My grandpa made the first gun for India. I was more than happy to play an army officer in a JP Dutta film which has such an amazing story. The war was lost in history. All the characters are real.

India’s map is because of them. At that time Sikkim wasn’t a part of India. His king asked us for protection so one battalion was posted there – of two grenaderes and a Rajput. Chinese had come down to Nathula pass, which is the border of Sikkim and China. They wanted to capture Sikkim too.

In the 1962 war, we lost many of our army officers – they were massacred. But according to me that wasn’t a war at all because war is when there’s a huge conflict. What happened at the Nathula pass, nobody was alert at that time. We Indians wanted good relations with China but never thought that they would attack us and UN was also not of much help then.

So when JP Dutta sir came telling me that he wants to complete his war trilogy with Paltan and I will be part of the project, it was a very proud moment for me.

Harsh: One aims to reach somewhere and achieve something. Every morning I thank God that I got to play this character. My character is no more but I think he is the one who has casted me in the film, because the way it has worked out, it’s nothing less than a miracle. I thank my father and grenadier grandfather to help me reach the stage where I am today. It is a big deal for me. I want to assure them that they will be happy seeing me in the film where I worked so hard I shed blood, literally. It is one of the most physically and emotionally charged roles which I’ve done.

The result is in God’s hands, so I don’t think I’m capable enough to think about that. But my journey has made me grow. I ran away from my house when I was 16. I worked in STD booth, cyber café, delivery boy and such odd jobs. In 2004, I was asked to deliver something to John Abraham. That’s where my journey began from, and I’m very lucky to be doing my second film itself with Border director.

For me pressure was that I need to work so whole-heartedly that people love my work. Because of Abhishek sir’s episode, we are all just hoping that people like the film. If I pass the test, it will be great.

Sonu: Not pressurizing, I was interested because when I came to Mumbai, it was my dream to do a war film wearing the uniform. It took time, but when it finally happened, it has to be JP Dutta saab. I realized why he’s best in the genre when I worked with him.

Gurmeet: Among my group of friends, I am actually called Bharat. Even though I have played an army officer in this film, I will do it every time I can. As an actor, we have the responsibility of million followers. In these 10 years, no film has been made on the Indian army. I think that should not happen. In fact I would like to plead to our superstars to make a movie on our army. Shah Rukh Khan and others even do that, but they should do it more often. I strongly believe that there should be a war film every one or two years. Those on the border are our biggest fans. Their day starts with Bollywood songs. Our youth also needs some kind of motivation. Do you remember how many people signed up for the army after watching Border? It’s very important for us to know about our own country! Thankfully, JP Dutta came with Paltan which should be watched by the younger generation, who couldn’t watch Border, to understand what our army goes through.

Since you have an army background, did you think that you would become an army officer?

Arjun: I did feel that at some point of time, of course. I used to really admire them. Their morning exercise, style and smell of their clothes, passion at the barracks - that really intrigued me. I thought that it would be a big deal if I become one of them. But I’m an artist finally, and so with time realized my passion and pursued it.

Sonu: I don’t have an army background but my proximity with the army has been amazing. Terrorism was at its peak when I was in Punjab so many colonels and brigadiers came to our house and we became friends. There was some relation with them and looking at them the feeling that we’re safe because of them made me proud. So that kid inside me always wanted to contribute, which happened with Paltan.

This year saw many patriotic films like Raazi, Parmanu and many others. So what have you got to say about the trend?

Arjun: Patriotic films will always be in trend and accepted by Indians, especially because we don’t have such events which really bring out the patriotism from us. In sports or at films, the national anthem becomes important to make people realize how the soldiers do so much for us, what kind of sacrifices they make. If you can evoke a proper sense of patriotism without making it a propaganda or jingoism, it’s wonderful to bring true patriotic emotion.

Gurmeet: It’s amazing. All the films even worked which proves that the youth feels for and respects the nation strongly. Outside India in fact it is compulsory to work in the army for 2 years. So to understand what our Indian army faces, it’s important to see such movies.

Do you think there’s any war which people haven’t explored and a movie can be made on that?

Arjun: The one I knew, I worked in it.

Arjun: Border, Dunkirk, Platoon, The bridge on the river Kwai, they were all beautiful films.

Is there a real-life soldier who inspired you as a person?

Arjun: Both my grandfathers.

Sonu: Not just any particular individual but every incident, whether Kargil war or Kerala floods, our soldiers have always come out. When Indian army comes to rescue our citizens, that makes them our real heroes.

Gurmeet: My father. I’ve seen in him in his uniform ever since I was a child. I used to wear his belt, shoes and feel proud. He’s my superhero who has taught me a lot in life, including how a soldier walks, talks and reacts.

Did JP Dutta have a special method to get you’ll into the character of a soldier?

Arjun: Yes, he said, “Submit to me. I know why I’m casting you. You have to trust me then we’ll be able to create something special.” And that’s what happened.

Sonu: He creates a world which is real. He makes you feel that you are in a warzone, which is where half of your work is done.

If you had to describe Paltan in one line, how would it be?

Arjun: A journey that went missing, and a story that we all should be very proud of.

Can we say it is your proudest film till date?

Arjun: It’s definitely one of my most special movies. To be walking in the shoes of such real-life heroes has been extremely inspirational and a big responsibility. How will the families of these jawaans and the grenadiers in Jaipur, where their regiment is posted, react when they see the film and say they’re proud, that will be the moment.

Your best friend on sets?

Arjun: All of them. We’re all a Paltan – Sonu, Gurmeet, Harsh, Luv, Jackie sir - I did my second film with him, the first never released. JP sir, Nidhi, our producer, everybody who was there, it was all just extremely special. I got two and a half months to spend in the terrain of Ladakh where the oxygen levels are 10-20% less. We all go looking out and standing up for each other. We ate together, told stories and it was a very special experience.

Harsh: Unfortunately no. We always followed Arjun sir so we were in awe of him. Just like John sir. Despite giving him (John Abraham) the helmet and having a bond since 14 years, I won’t be able to call him a friend even though I respect him. Sometimes they introduce me to their friends, calling me their buddy. So they can call me buddy but I can’t even think about doing that. People love you, but you should always know where you stand. I always remember my background so they can’t be called my friends but you can say that we’ve developed a brotherhood. Arjun sir gave me a lot of warmth and there’s no bigger help than Sonu sir. When I heard about Gurmeet, I had this perspective that he would be arrogant because he’s so famous on TV. But he’s the absolute opposite of arrogance.

Sonu: Yeah, lots of them. Lots of soldiers who were with us for 3 months. We connected with them, spoke to them. We shared about our families, wished them and even shot videos. So the rapport we shared on sets was extremely special.

Gurmeet: I can’t take one name because everybody will kill me. We had a different bonding and experience in Ladakh. Imagine we were there for 3 months without any heroine! We guys sat down together and had fun among ourselves. So no matter how many films I do but the kind of experience I’ve felt with this, it will remain with me for life.