Entertainment   Bollywood  06 Sep 2018  Karisma bonds with Shweta, but did Abhishek ignore her in front of Aishwarya?
Entertainment, Bollywood

Karisma bonds with Shweta, but did Abhishek ignore her in front of Aishwarya? 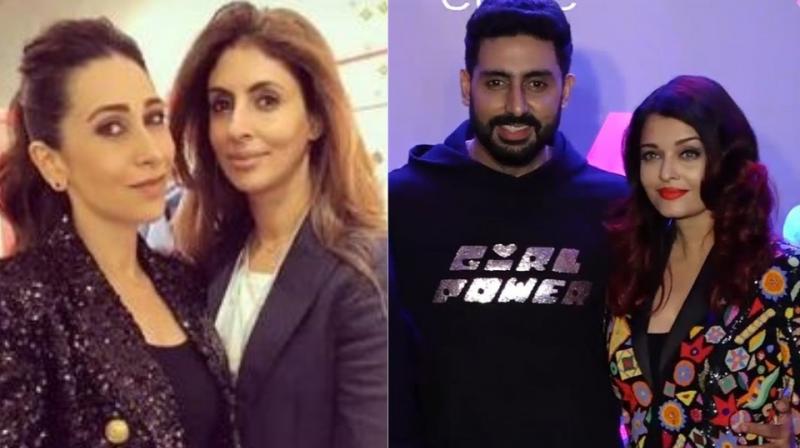 Mumbai: In the film industry, when you break up, you part ways with not just your lover, but most of the times also with the other person’s family and friends.

Most of them generally ensure they avoid awkward encounters with not just the ex, but also with their close ones, to avoid unnecessary media attention.

This unwritten rule, which stays true irrespective of the time that has passed since the split, was broken by Karisma Kapoor and the Bachchan family recently.

It’s a known fact that Karisma and Abhishek were planning to get married many years ago, but due to unknown reasons called off their engagement in 2002.

And since then, the two actors and their families generally maintain a certain distance.

So it was surprising that Karisma was invited for the launch of Shweta Bachchan Nanda’s fashion brand store at a grand event on Saturday with a slew of stars like Katrina Kaif, Suhana Khan, among others in attendance.

And what was more surprising was Karisma accepting the invitation and arriving for the event where all Bachchans were seen together, a rare occurrence of its own.

And the reason seems to be growing friendship between Karisma and Shweta.

Not just did the actress lend support to her friend by attending the event, she also later posted a picture with Shweta on Instagram stories and lauded the star daughter’s latest collection, calling it 'fabulous.'

Previously too, they had posed together at Mohit Marwah’s wedding in UAE in February.

On the other hand, Abhishek arrived with wife Aishwarya Rai Bachchan, posed with her for the cameras. The actor ensured he didn’t have to cross paths with Karisma, something that was also seen at the recent prayer meet for Shweta’s late father-in-law Ranjan Nanda, whose wife Ritu is Karisma’s aunt.

Reports of Abhishek avoiding Karisma surfaced on several portals, and even YouTube channels played the event footage, titled ‘Abhishek ignores Karisma’, of the actress arriving with Amrita Arora and Anu Dewan, immediately after Abhishek and Aishwarya entered the store together.

Though the ignoring bit is a bit obvious, we are not sure if they actually came face-to-face.

While on one hand, Ranbir Kapoor and Alia Bhatt met their exes Katrina Kaif and Sidharth Malhotra cordially recently, and Sanjay Dutt and Madhuri Dixit-Nene are shooting together, some of them feel it's better to be 'unmet’ especially when one of them is present with his spouse.