Language in the LOL age

Versatile actor Manoj Bajpayee talks about his apprehensions concerning language, especially in an era where words are endlessly modified. 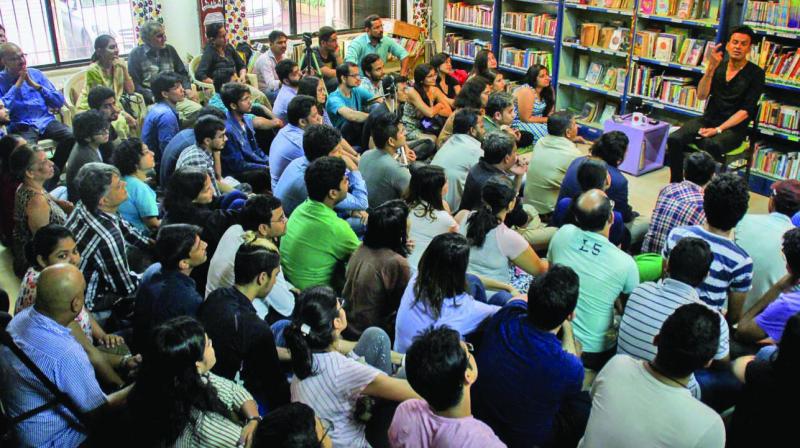 Manoj Bajpayee addressing the audience during the session

The language of the younger generation today has a brashness that comes with living in an urban set-up. Technology too has overpowered language and reduced real-life conversations among humans, decaying the very art of sharing words.

But oblivious to this very art, millennials are cutting short their sentences and words, and losing touch with a conduit of culture — their mother tongue. With more than 70 people packed in a cosy space in a  library, Junoon — a stage for theatre, invited visitors to ponder over an aspect crucial to communication — language. Curated by Mumbai local — Journey with Language had the versatile actor Manoj Bajpayee expressing his distress over the evolution of day-to-day language.

One of his biggest concerns was his daughter’s updated language.  “I am wondering how do I teach my daughter to say ‘it is alright papa, rather than it’s cool’,” he laughs.

Delving into history, the Satya actor mentioned how the Urdu language was used for official interactions even after partition.

“Languages have been exchanged between the two borders and that’s the reason we have Hindi and Urdu. As far as English is concerned, it is because India has a history with Englishmen,” he says.

At the same time he raised concerns over the new language fad — Hinglish. “What is Hinglish? Where has it come from? People don’t even speak right Hinglish, because it’s not a language, it’s an excuse. And why can’t we teach our kids the Hindi language?” he asks.

And soon, the actor’s concern shifted to the lack of language awareness in the field of performing arts. Manoj is aghast at the lack of knowledge about language and it’s diminishing importance in an area where it is  of great relevance.

“I am surprised to see that the cinema and theatre fraternities too are struggling to have sound language,” he rues. Adding that even when a language is modified or styled according to a character, “For that too, one needs to know the language to be able to depict a character accurately.”

Even though he has grown up speaking Bhojpuri, Manoj asserts that he can still catch incorrectly spoken English. “Excuse me, but I don’t get to hear good English either,” he says firmly. The actor who has worked hard polishing his Hindi and English adds, “That is because I love language.”

Presenting the audience with examples of well-spoken individuals, he praised politician Shashi Tharoor and actor Ashutosh Rana for their command over English and Hindi. “Their languages sound like archives and you can go on listening to them. They are very thorough with language,” he gushes.

When someone from the audience pointed out how written language too is missing its roots, Manoj blamed it on technology. He is of the opinion that technology has improved information gathering, but has stunted communication.

“When we don’t have a dialogue, where are we going to use those words? We have stopped worrying about our broken language,” he claims. Narrating an incident, the actor shares how he was shown the door in many theatrical productions because of his dialect and accent.

“It’s good that happened, because it challenged me to put in more efforts to learn and improve. But now, people have stopped demanding excellence,” he says. Interrupting the actor, a senior citizen expressed his concern for people who can’t write a certain language but can speak it well, to which the actor said, “I believe one should have a thorough grasp over the language one operates in.” Talking about his trysts with the new-age lingo and acronyms he encounters daily, Manoj jokes, “There was no LOL (Laughing out loud), but basic language when I started speaking. It took me long to understand the meaning of LOL and I’m afraid these acronyms will one day become part of literature.”

At the end of the session, when the actor was asked if parents could do their bit to inculcate in children a value for language and culture, the actor said, “I want to teach my daughter to respect every language. I will help her deal with the challenges she faces while learning every language, including Hindi,” he concludes.