Ranbir Kapoor on cousin Aadar Jain: He'll have to talk about nepotism

YRF used legendary late actor Raj Kapoor's pictures to introduce the actor's grandson as their newest kid on the block. 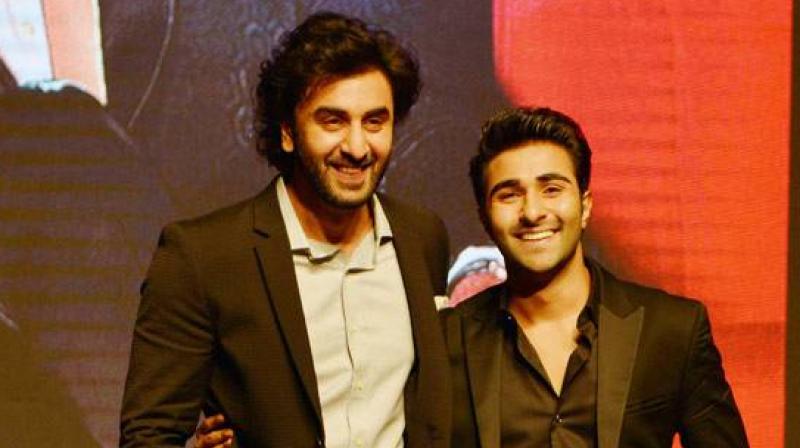 Mumbai: Ranbir Kapoor's cousin, Aadar Jain, is set to make his film debut and the 'Jagga Jasoos' actor said he is aware that the youngster will have to face questions about nepotism.

The film will be directed by Habib Faisal, who launched Arjun Kapoor and Parineeti Chopra in his 2012 movie 'Ishaqzaade'.

At a special event today, Aadar and Anya were introduced by Ranbir and Anushka Sharma. Before that, the same day YRF officially made the announcement on their Twitter handle, which was received flak from the users over nepotism. Soon, the topic started to trend all over the internet and Aadar was slammed by many.

"When Aadar called and told me that he bagged the film, I felt a lot of pride and gratefulness. But at the same time, I was a little nervous, not knowing how this boy will be accepted. It is a funny industry," Rambir told reporters as he addressed the issue.

"Yes, the platform that he has will spark a debate about insiders vs outsiders, nepotism and all of that. But I am going to keep that aside for now. Eventually we will talk about it, he will have to face it."

Aadar, who is the son of Reema and Manoj Jain and grandson of Raj Kapoor, said he is honoured to be making his acting debut as it has always been his dream.

He also said he is aware of the ups and downs of the film industry and is prepared to handle the media scrutiny.

"All these things happen. It comes with the territory. I am ready for it. I believe the most important thing is being truthful to your work, that's why you're here," Aadar said.

Ranbir, who starred in the film, shared a few anecdotes about working with his cousin on the sets of 'Ae Dil Hai Mushkil'.

"I used to ask Aadar to say Aishwarya's lines while I got ready for my sequences. I used to make him enact Aishwarya's scenes too."

Anushka introduced Anya and said she can relate with her journey because both of them come from non-filmy families.

Anya said she wants to work with actor Ranveer Singh. "When I saw 'Band Baaja Baarat', I became his fan. I find him very relatable."

Anushka added, "Ranveer met her backstage now and called her 'beta'. And I was like 'did you just say beta'?"

Ranbir said he would advice both of them to be honest with their work.

"I want to tell both the kids that the odds are the same. There are no shortcuts, no formulas, there are highs and lows and lots of sacrifices. You've to give a lot to be accepted and be honest to your craft. It's about how you play the game."