A loss too tragic to bear, says Manish Malhotra

Popular designer Manish Malhotra shares his memories of actor Sridevi and his take on sustainable fashion. 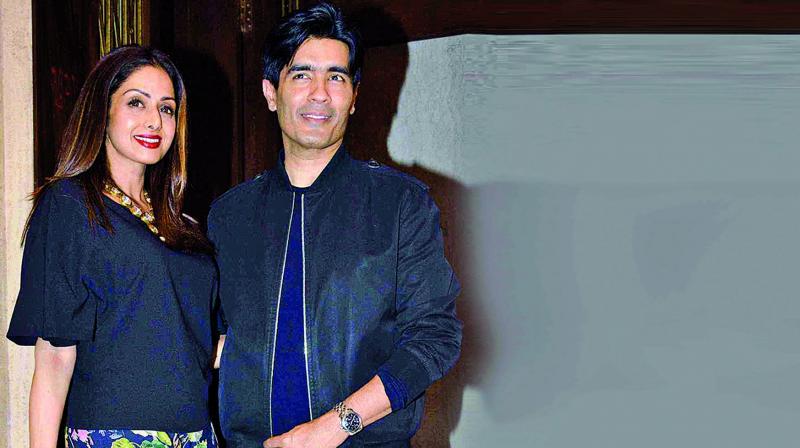 In the fag end of February, the shocking, late night news from Dubai shook millions of film lovers in India and wherever Indian cinema is revered. It was too early an exit for actor Sridevi, a feeling palpable to all.

If death can rip apart anything, it is only the physical presence between the dead and the ones alive, we understand from the words of celebrity fashion designer Manish Malhotra.

“With a heavy heart I am here,” Manish, on his first public outing after losing his dear friend in Kochi, begins. We spot two goodbye notes for Sridevi on his Facebook timeline. The first one, a walk down memory lane, ends with a footnote ‘a gem lost too soon, a star that will never fade.’ Sridevi has left behind too many imprints he holds close to his heart.

“I think there is not one thing I can keep close to my heart about Sridevi. There are many — her personality, she, as a person and a great artiste, I know. Being a wife, mother, friend, actor and a great professional, she had commitment and sincerity towards whatever she did. Basically, one great aspect she had was her focus on what she has been asked to do. In 28 years, I never heard her speak about another actor or speak ill about somebody. As a human being also, she was far more superior,” he remembers.

Going through his costume design chronicle, Manish first designed for Sridevi in Gumrah in 1993. Both had actually met a few years before that, in 1990, when the actress was at the peak of her career and he at the start of his. Among the celebrity stories buzzing around the internet, this fascinating tale of these two friends was also celebrated. On and off screen, Sridevi often appeared in Manish’s couture. He can’t design for the beloved acto any more, but their chemistry remains through her legacy. Manish is the designer to Janhvi Kapoor in her debut outing Dhadak.

After spending decades in the world of glamour, this A-lister from fast fashion is a missionary of sustainable fashion. Upon realising that fashion too could pollute the world we live in, Manish lets his actions redefine the way couture has been understood so far.

“Pollution is an issue today for all of us living here. For a better, healthy lifestyle and living we are to be very conscious of causing less pollution. To be honest, to take on sustainable fashion is not 100 per cent possible. There are different kinds of fashion designers and each one wants to get different kinds of clothing. The awareness is so important. When you are aware of something, you will make that effort towards sustainable fashion,” he feels.

Manish observes that the past two years have been open for a fashion evolution in India, thanks to the growing awareness through social media.

“Today’s generation is extremely aware and is going back to a lot more handloom and cotton. Some time back, it was considered very intellectual or artsy. It is back to the form it used to have in the earlier days of fashion,” he points out.

“There is certain interest, awareness and aesthetics that have arrived all over. I have to thank social media for it as well. The young generation is so evolved, they are much more aware than a generation a decade ago,” he adds.

And Manish assures he walks the talk. At the venue of the India Fashion Summit he was attending, were a handful of uber cool designs he himself had done on Kerala handloom to promote the eco-friendly wear.

“Handloom is already positioned as a brand. In the last two years, it has really taken the centre stage. Brides and bridegrooms today want to wear cotton for at least one function. There are stars who wear handloom and cotton on the red carpet. It is a big brand today,” he says.

Added to it, Manish, this summer, has his vision set, to develop cotton couture.