Karan Johar hits back at Kangana after 'nepotism', 'movie mafia' jibes on KWK

The filmmaker says that he is done with the actress playing the victim card at every given point of time. 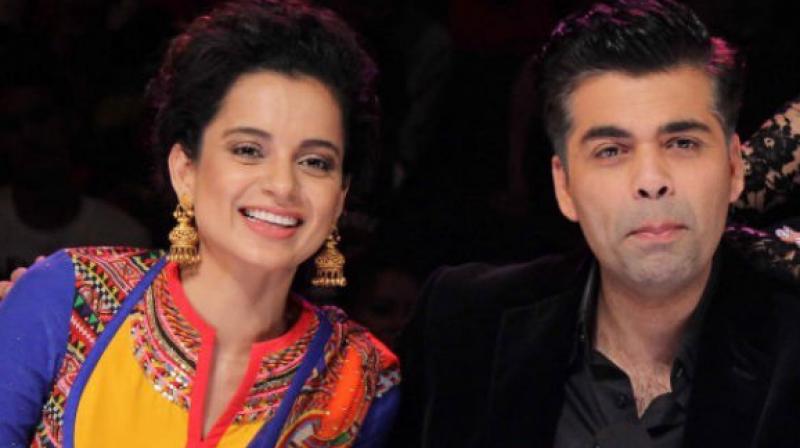 Karan and Kangana are yet to work with each other in a film.

Mumbai: Kangana Ranaut makes headlines for her fiery statements, some of which were on display at her recent appearance on Karan Johar's 'Koffee with Karan.'

Kangana Ranaut had called out Karan Johar on his 'nepotism' and 'movie mafia,' on the show.

While Karan, who was recently blessed with twins via surrogacy, had maintained a dignified silence through it, he's finally reacted and slammed the actress on her unsolicitedly blunt perspectives and comments.

"I am done with Kangana playing the victim card at every given point of time with a sad story to tell about being terrorised by the bad people in the industry; if it’s so bad, leave it," he lambasted.

Karan said, "I was gracious enough to keep everything. I could have edited out so much. It is my show. I said no, this is her opinion, let the world see it. I gave her the platform."

"I appreciate that she had a great, great perspective and point of view and everyone lauded her that she came on my show and ‘gave it out to Karan’ like people put it," he added.

Karan Johar also reacted on her comments on 'nepotism'.

"I don't think she's understood the entirety of that statement. Because what is nepotism? Am I working with my nephews, nieces, daughters, and sons? And what about those 15 filmmakers who are not from the film industry who I have launched and put into movies? That no one will talk about," he slammed her.

He also blasted her on every stand she took against the industry.

"When she said 'movie mafia' what did she mean? Because what does she think we're doing? Sitting and not giving her work? Is that what makes us mafia? No, we do that by choice...I do that because may be I'm not interested in working with her. That doesn't make me a movie mafia, it makes me a man with an opinion," Karan posited.

'She deserves all the national awards, but I'm done with Kangana playing the victim card...' @karanjohar #KaranJohar pic.twitter.com/85SyK1EZr0