Ironical: Did Taapsee, said to be dating an athlete, just take a dig at Virushka’s wedding?

Virat Kohli and Anushka Sharma’s wedding was one of the most celebrated events of 2017. 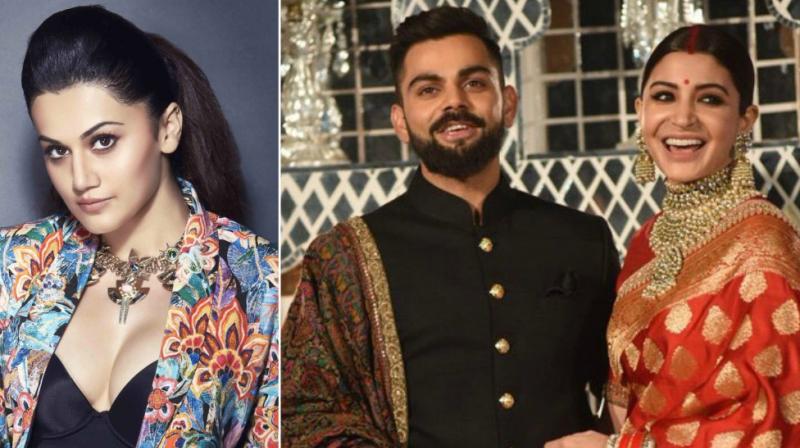 Taapsee in a photoshoot, Virat-Anushka at their Delhi reception.

Mumbai: Virat Kohli and Anushka Sharma’s wedding was one of the most celebrated events of 2017. Even in 2018, the couple is giving all sorts of relationship goals.

‘Pink’ actress Taapsee Pannu had something to say about the “wedding season”. She also went on to clearly state that she will never marry a cricketer or a rich businessman.

“It’s not that I have tried too hard to keep my personal life under wraps and wanted to keep it away from everyone. I am not dating any cricketer, actor, or director, producer or any big Indian businessman. Whenever my wedding happens, there will not be any hoopla about it. Right now there is some wedding season going on in the country but when I tie the knot, I don’t think it will interest the Indian media so much. Whenever my wedding happens, it will not be to a cricketer or a rich businessman,” Taapsee told Hindustan Times.

But look at the irony of it! Taapsee, if most reports are to be believed, is dating another sports player, an Olympic silver medallist badminton player Mathias Boe.

A Denmark player, Mathias also happens to have been snubbed in the Indian Badminton League (IBL) and promised to never set foot in India again. But here he is, lost his heart over Taapsee, which he even openly declared on Twitter. Very recently, the player had posted this:

Will enjoy a good movie with the beautiful @taapsee on my flight to Hong Kong. Next time u fly @emirates you have to watch it, that’s an order☝🏼😜😜 @Runningshaadi pic.twitter.com/vtHIUxq0bG