Coming soon on your TV screen

Apart from English, Hindi, and Marathi films being a part of the showcase, there will be foreign language films showcased as well. 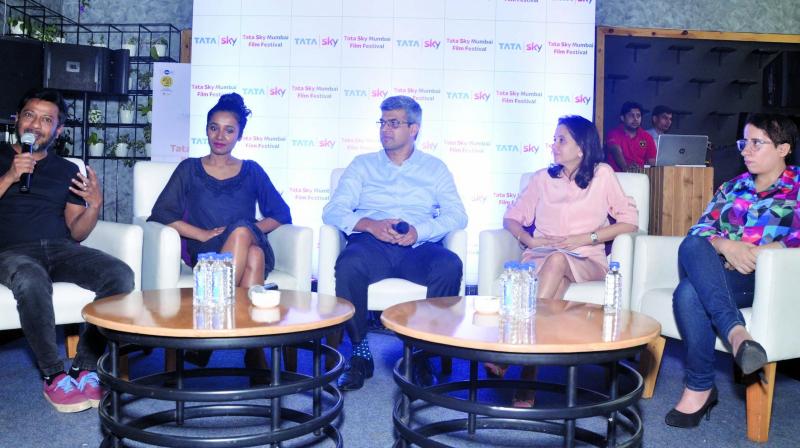 Onir, Tannishtha Chatterjee, Arun Unni, Anupama Chopra and Guneet Monga, who were all a part of the panel.

A satellite television provider will be showcasing films that have been screened at Mumbai Film Festival with the attempt to bring quality cinema to the fore.

When you think of your conventional Bollywood film, you almost know what is in store for you: outlandish acting, garish makeup, item girls prancing on over-sexualised item numbers that ring high on the charts, and a plot twist that is rarely preserved till the climax comes on. These core characteristics of conventional Bollywood films sure gets the registers ringing at the box office, but rarely achieves anything beyond that.

Changing this narrative for the last several years are film festivals that bring films from different lands speaking a variety of different languages, spread over a diverse spectrum, under one umbrella. But even as film festivals are attempting to bring an assortment of quality art to the fore, these films rarely ever reach the screens of the conventional Bollywood cinemagoer.

To bring this array of critically acclaimed films to the screens of the regular cinema audience, Tata Sky has collaborated with Mumbai Film Festival. The idea is to showcase these hidden gems on television. “This collaboration is for those movies that we see the potential in,” says Arun Unni, chief content officer at Tata Sky. He adds that even with the bountiful potential that these films show, they have a niche audience. “We want to get these films to the television screens of the audiences, so that they get a chance to watch more quality films,” he says.

Arun assures that his team and the Mumbai Academy of Moving Image (MAMI) team have worked in close quarters in order to handpick these films and curate the Tata Sky Mumbai Film Festival.

Onir, director and screenwriter, says that the country has immense talent, but because this talent is not in the direct vision of the audiences, it doesn’t get the returns it deserves. “We are hopeful that more and more audiences will be welcoming towards films that are screened at film festivals,” hopes Onir, adding, “Once these films reach the television screens of audiences, they will ultimately make the shift towards quality and even go watch these films in theatres.”

Arun recalls how the public service broadcaster Doordarshan screened films that were more than just conventional drama, and he hopes to bring the same back with this collaboration. He says, “Doordarshan would telecast quality films. Nowadays, channels just have the regular masala fare.”

Apart from English, Hindi, and Marathi films being a part of the showcase, there will be foreign language films showcased as well. “We have also short listed films across different tones — documentary, fictional, even children’s animation — there is something for every viewer.”

Anupama Chopra, who heads the Mumbai Film Festival, says that is necessary, now more than ever, to have this content reach a mass audience. Calling the association a celebration of films, the director of the festival says, “This union will see a fresh exchange of art, films and culture for both storytellers and film lovers. Conventional Bollywood lovers will now have  better options to entertain themselves.”