Shriya has got a release almost immediately after getting hitched, and the actress spoke about it in an exclusive chat. 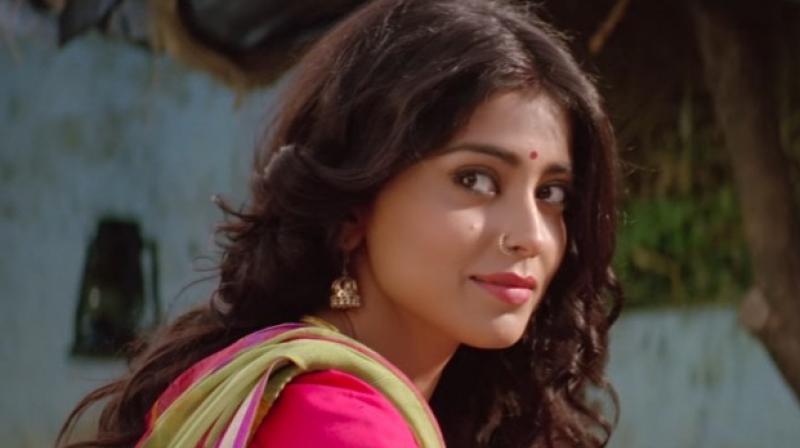 Shriya Saran in a still from ‘Phamous.’

Mumbai: After Anushka Sharma last year, Shriya Saran was another actress who kept her marriage to Andrei Koscheev hush-hush.

While the former sent invitations to some of the biggest personalities of the country for multiple receptions, there was no such thing for the latter.

In fact, the only confirmation of the wedding was the pictures and videos that flooded the Internet. The actress still won’t utter a word about it and put up a clear stance, “I will not talk about my personal life” in an exclusive interview with Deccan Chronicle.

Much like Anushka and Sonam Kapoor, Shriya has also got a release almost immediately after getting hitched.

And coincidentally or not, she plays a newlywed in ‘Phamous.’ Opening up about the film, she says, “It’s a film that we shot in Chambal with a lot of hard work and research on the whole area. We even lived in their location, thus it was very easy to understand the character as you start living it and be in the heart of it all. There was a lot of fun in it and we enjoyed.”

While Andrei is Russian, her reel husband in the film, Jimmy Sheirgill is poles apart, based in the rural heartland. Shriya raves about her co-star, “It was a great experience as he is an amazing actor, extremely level-headed and fantastic to work with. He is very gifted, intuitive and works really hard. He blends in the character very well, with the clothes, body language, he’s very confident about it.”

The action thriller features some more experienced names and the actress shares, “It was fantastic to work with Kay Kay Menon, Jackie Shroff and everyone. Every supporting actor in the film is an established actor and very natural. I'm grateful to them that they came ahead and agreed to be a part of this film.”

It's a return to Bollywood after three years since the release of ‘Drishyam’, but Shriya doesn’t rue the gap, “It is because the kind of films I was getting I wasn’t liking them or somehow I wasn’t lucky enough. So if I get better films, with better characters and stories I love, I would do that for sure. It just didn’t happen to me.”

Despite films like ‘Awarapan’, one might say the actress’ Bollywood career didn’t follow the same trajectory as her success down South. But Shriya doesn’t see the difference per se, “I do about one film a year, when I do Tamil, they say why you’re not doing Telugu movies, and when I do Telugu, they say the same about Hindi. I’m just working. As an actor, you are the mercy of the kind of films you get. I’m enjoying what I’m doing.”

The actress will be seen in another Bollywood film, ‘Tadka’, but there’s been no update on the release. Nonetheless, Shriya reveals, “That was a great film to work, I enjoyed a lot. Prakash Raj is a brilliant director, great experience working with him and Nana Patekar.”