When Kangana Ranaut wanted to break the television screen for Sridevi

The actress got emotional about the legend’s untimely demise during a recent interview to a tabloid. 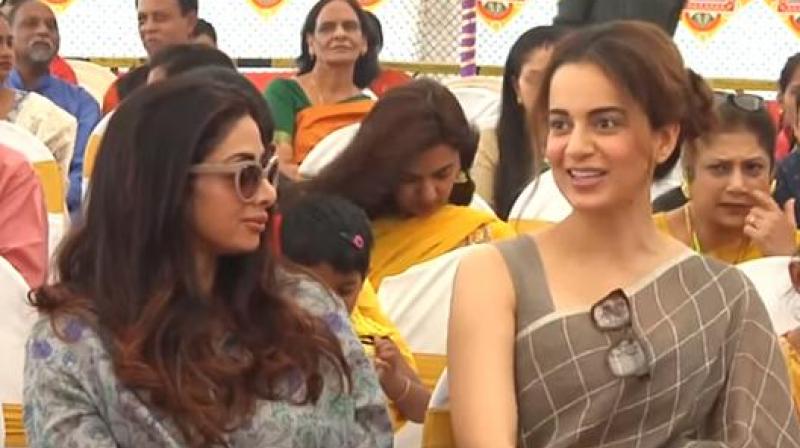 Sridevi had met Kangana Ranaut at an event just few days before her death.

Mumbai: Sridevi was not just a beautiful woman and a powerhouse performer on screen, but was also an inspiration to most actresses of this generation.

Be it Priyanka Chopra, Sushmita Sen, Vidya Balan, Katrina Kaif, most of them expressed how much of an impact Sridevi had on their lives after she passed away in Dubai on February 24. And it’s not very different for Kangana Ranaut either.

The actress got emotional about the legend’s untimely demise, during a recent interview to a tabloid.

“I was her fan since I saw a tubelight ad of hers as a child, and wanted to break the TV screen to bring her into our home. When I’d dress up for cultural shows, my great grandmother would fondly call me Sridevi. Years later, when I returned home exhausted after a long day, I’d watch her Charlie Chaplin sequence and the 'Kaatey Nahin Katate’ song from 'Mr India' and marvel that it was the same woman in both. She was such a childlike soul whose loss I feel deeply,” Kangana told Mumbai Mirror.

The actress also revealed that Sridevi would call her if she and her daughter Janhvi liked her performance in a film.

Kangana had been busy shooting for her upcoming film ‘Manikarnika’ and couldn’t make it for Sridevi’s last rites or to pay her last respects before her funeral.

However, she was one of the celebrities along with Aamir Khan, Virat Kohli and Anushka Sharma who visited her residence on Sunday to pay her condolences to the grieving family.

Kangana was one of those present at the event where Sridevi's last controversy before her death, her ‘lip job’, had made headlines.