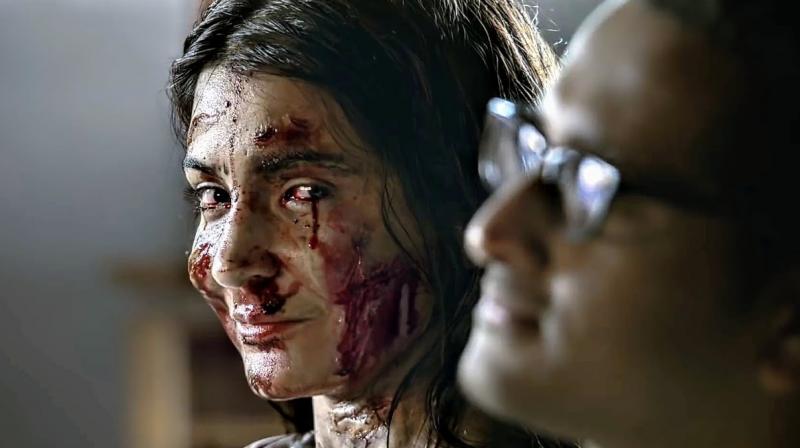 Anushka Sharma in a still from 'Pari.'

Mumbai: Anushka Sharma became Mrs Virat Kohli in a grand ceremony in Italy last December, but the collections of her latest venture are anything but grand.

The actress’ first film after marriage, ‘Pari’, has received an average response at the box office in the opening weekend.

After starting on a decent note with Rs 4.36 crores coming in on Friday, the horror flick hardly showed any jump in collections in subsequent days, bringing in 5.47 and 5.51 crores on Saturday and Sunday.

The film should’ve surely done better than the Rs 15.34 crores it has finally collected, considering the festive period due to Holi being celebrated on Thursday and Friday.

The reviews are also mixed so chances of a massive turnaround are also sparse.

The other Holi release, ‘Veerey Ki Wedding’ starring Pulkit Samrat and Kriti Kharbanda did even worse, collecting only Rs 2.20 crores, according to Box Office India.

Luv Ranjan’s ‘Sonu Ke Titu Ki Sweety’ did better than both the films, earning Rs 18-19 crores, though it was its second weekend.

The film’s tally now stands at Rs 62 crores and the Kartik Aaryan, Nushrat Bharucha and Sunny Singh starrer has been declared a super hit at the ticket windows.

Urvashi Rautela's ‘Hate Story 4’ and Taapsee Pannu-Saqib Saleem starrer ‘Dil Juunglee’ will be the releases next Friday, and it’d be interesting to see how much they can affect the above three films’ runs.