Entertainment   Bollywood  05 Mar 2018  Loving his ride: Taimur looks adorable even when tensed on a horse with dad Saif
Entertainment, Bollywood

Loving his ride: Taimur looks adorable even when tensed on a horse with dad Saif

Another picture of the toddler with his father from his recent trip to Rajasthan has gone viral on social media. 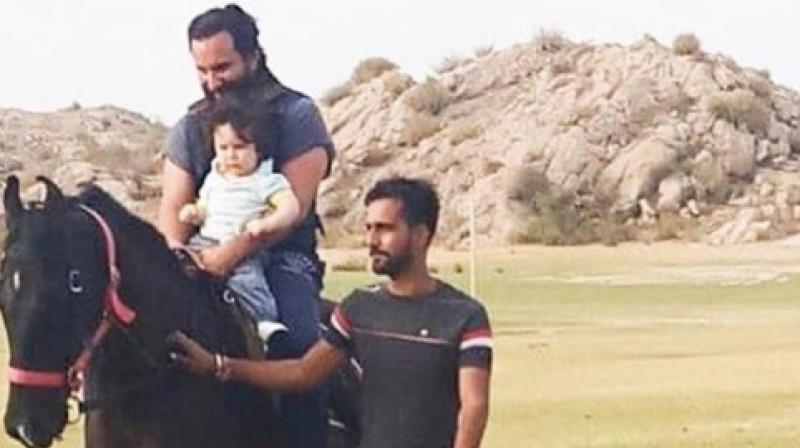 Mumbai: Kareena Kapoor Khan and Saif Ali Khan’s son Taimur turned one last year, but he has not stopped making headlines for his adorable features.

His recent trip with mommy and daddy to Rajasthan for the latter’s film shoot provided countless such adorable moments.

Be it watching Saif play cricket sitting in the arms of his mother or going on a jeep ride sitting in father's lap, the toddler surely enjoyed his trip, providing us more reasons to love him.

Another such snap from the trip is going viral now, this time of Saif taking Taimur for a horse ride.

Taimur seemed slightly tense in the arms of his smiling and bearded dad, but still looked too cute.

Taimur seems to be love his rides, be it the jeep and horse rides, or taking his cousin Inaaya Naumi on his personal car, another picture of his that had gone viral.

#New They both look so sweet 😇 #inaaya #taimuralikhan

About the picture, Inaaya’s mother Soha Ali Khan told Hindustan Times in an interview, “They look a bit like each other. They are cousins after all. He’s her elder brother. Hope he will protect her in the near future.”

There is only an age difference of nine months between Taimur and Inaaya Naumi, and Soha doesn’t have to look too far for advice on motherhood.

“If I’ve any question, any doubts, whether it’s about consulting a paediatrician, hiring nurses... anything, Kareena is just a call away. Kareena’s given me so many tips that I can write another book.”

About father Kunal Kemmu’s role, Soha said, “Kunal’s extremely supportive. He stays up nights with me. If I feed her, he burps her. He plays with her, lulls her to sleep. Inaaya looks at him nowadays and smiles. There’s something special between a daughter and a father. I’ve been experienced that with my own father. It’s something you can’t explain.”

We’ll be waiting for the day Taimur and Inaaya Naumi become a famous cousin pair, just like Ranbir Kapoor and Kareena.